Cholesterol is not all bad. It is important in membranes. We are studying Cholesterol Microstructures in Membranes.

Biophysics is one of the fastest growing areas of physics. That’s one of the reasons we study it at Goshen College. Some of the most interesting questions in modern physics are in biology.

Biophysics is that branch of knowledge that applies the principles of physics and chemistry and the methods of mathematical analysis and computer modeling to understand the mechanisms of biological systems in terms of fundamental principles. It is one of the most diverse and interdisciplinary areas of study.

Biophysics is primarily a molecular science. It seeks to explain biological function in terms of the molecular structures and properties of specific molecules. The size of these molecules varies dramatically. The problems studied also vary from foundational studies of proteins to studies in the neurosciences to pharmacology.

Biophysics offers career opportunities in teaching and research at colleges, universities, medical centers, research institutes, and government laboratories, in research and development at pharmaceutical, biotechnology, nanotechnology, and other biologically-oriented high-tech companies, and in regulation and public policy at agencies of state and federal governments and at private organizations.

Experiments:   We do experiments on model biological membranes and ion channels.

The axon of a neuron contains sodium and potassium channels. These channels are opened sequentially down the axon of the neuron after excitation of the cell. This causes depolarization of the cell and constitutes the electrical pulse, which propagates along the cell.

At the synapse this electrical pulse results in release of calcium. The calcium causes a pore to form between vesicles containing the neurotransmitter docked at the presynaptic membrane and the synaptic cleft.  The sequence leading to release of neurotransmitter is shown in Fig. 3.

A detailed picture of the transmission at the synapse is shown in the drawing in Fig. 4. 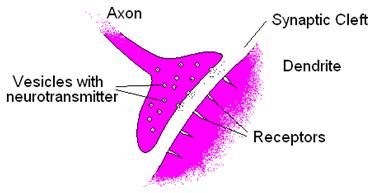 The receptors are ligand gated ion channels or metabotropic receptors.

Vesicle fusions can be studied using a model system in the laboratory. A phospholipid bilayer (membrane) is formed over a small (150-300μm) hole separating two salt solutions. The apparatus is shown in Fig. 5. 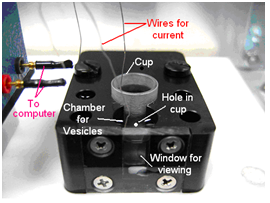 The block and cup are located inside a Faraday cage that shields against outside electrical interference from lights and other apparatus. Fig. 6 shows the apparatus with the Faraday cage open. 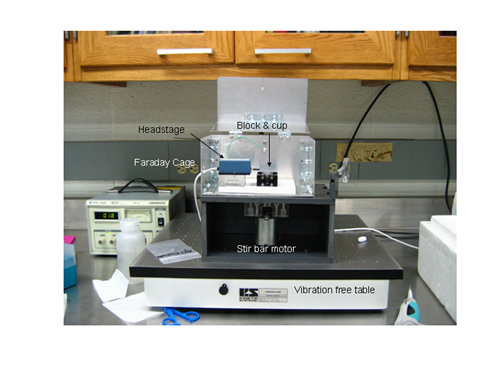 The entire apparatus including amplifier and computer is shown in Fig. 7. 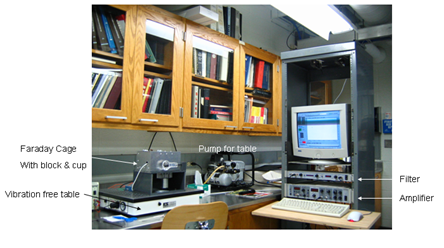 In an experiment vesicles are introduced into the salt solution on one side of the bilayer. This is shown in Fig. 8.

The flea stir bar keeps the vesicles moving in the chamber and they will collide with the bilayer. Fusion will occur

This is shown schematically in Fig. 9.

In our experiments we use the plant equivalent of cholesterol, which is ergosterol, because it is more effective.  The nystatin/ergosterol channels close as the ergosterol diffuses into the membrane.  This results in decay in the bilayer current in Fig. 9.

In Fig. 10 we show actual data for current spikes. 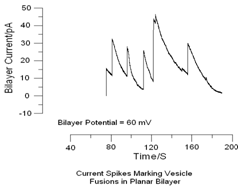 We were first only interested in the number of fusions because we were interested in modeling the transmission of neuro transmitter by vesicles. The form of the current spikes was of initially of no particular interest. We expected the decay of the bilayer current to be exponential.

But we noticed that the decay of the bilayer current was linear. Data are shown in Fig. 11. 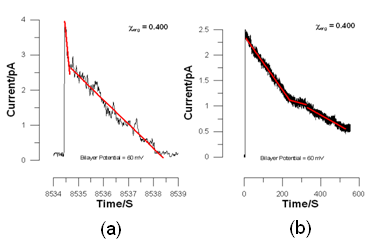 The linear decay scheme was the real surprise. But we soon found that there was also a bimodal distribution in the spike durations. In retropspect this bimodal duration may be seen in the spikes in Fig. 10. The extreme difference in the time scales is more evident in the spikes in panels (a) and (b) of Fig. 11.

In Fig. 12 we have plotted the duration of the spikes τD in seconds against the mol fraction of ergosterol in the vesicles. 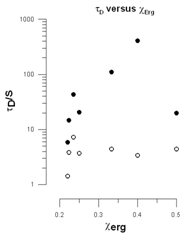 Between χerg = 0.25 and χerg = 0.50 we see spikes of constant short duration and spikes with a long duration that increases approximately exponentially up to χerg = 0.4 and then drops precipitously at χerg = 0.5.

We also proposed that the domains contained erosterol in regular arrays known as superlattices. These were first proposed by Parkson Chong’s group at Temple University and had been studied by Juyang Huang at Texas Tech. In Fig. 13 we show the basic form of these superlattices 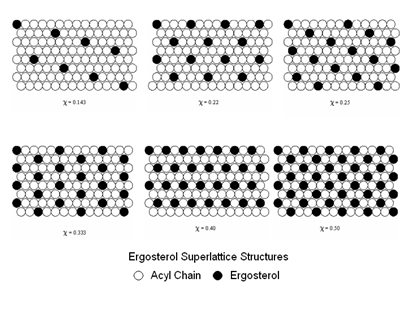 The model we have proposed is illustrated in 14. 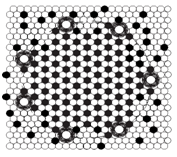 The actual form of the nystatin/ergosterol channels is unknown at this time.Manuel Prieto and his coworkers at the CQFM, Instituto Superior Te´ cnico, Lisbon, Portugal , have shown that nystatin/ergosterol channels contain between 4 and 12 nystatins. The nystatin monomers, lying on top of the membrane, rotate and penetrate the membrane to form channels. This is shown diagrammatically in Fig. 15.

In Fig. 15 we have made no attempt to indicate the presence of the necessary ergosterols for support of the channel.

In Fig. 16 we show a molecular modeling result for a nystatin channel in which there are six nystatin monomers. 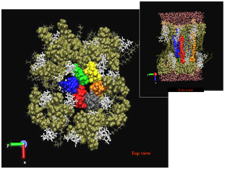 Because of the uncertainty in the actual form of the nystatin/ergosterol channel, particularly in the interaction with the sterol, we have made no attempt to include the details of channel structure in our model. Our model includes

·          Nystatin/ergosterol channels form around the perimeter of ergosterol-rich domains in lipid bilayers.

·          The ergosterol-rich domains dissolve by diffusion of the ergosterol into the empty bilayer.

The model has been tested against our own data and those of Dixon Woodbury. This has been pubished [Helrich, C. S., J. A. Schmucker, and D. J. Woodbury. 2006. Evidence that Nystatin Channels Form at the Boundaries, Not the Interiors of Lipid Domains. Biophys. J. 91:1116-1127].

We are presently pusuing tests of our model against further data. This is the subject of the next section.

We initially realized that our model was basically correct when we conducted a statistical mechanical analysis. We then decided to carry out numerical simulations of this using the Monte Carlo (MC) approach.

MC simulations are based on what is called a Markovian system. In a Markovian system each molecule moves from its location at a particular time to another location based on probabilities. But the molecule system retains no memory of the past locations of the molecules. So the beginning of each MC step requires ony information about where the molecules are. In a MC step each molecule is considered separately. A possible move is chosen and then “permission” is considered. The decisions of the possible move and the permission are based on random numbers. That is, the MC simulation is like gambling with a weighted “permission.” Hence the name “Monte Carlo”.

In our experiments vesicles are prepared containing a known percentage of ergosterol and sufficient nystatin to form channels. So the sesicle lipid membrane contains ergosterol-rich domains (Ergosterol Superlattics Domains, ESLDs), which are presumably surrounded by nystatin channels. When such a vesicle fuses with a planar bilayer, the vesicle membrane is transported to the bilayer. The bilayer is then an open lipid bilayer with a small remnant (patch) of ergosterol-rich domains surrounded by channels.

To model this situation we first form the remnat from a MC simulation at the sterol concentration desired. Then we place this remnant in the center of a large open bilayer and perform a second MC simulation to study the rate at which the ESLDs dissolve due to diffusion. We equate the number of channels to the perimeter, based on the assumption that there is a distinct linear density of channels around the perimeter of each ESLD.

In Fig. 17 we have an example of a vesicle bilayer resulting from a MC simulation.

When we place this remnant in a larger lattice of acyl chain sites (an open bilayer) and conduct a MC simulation, we obtain the dynamics of the breakup of the mosaic as shown in the snapshots in Fig. 18.

A plot of the perimeter of the ESLDs as a function of MC step is shown in Fig. 19, right panel, and a corresponding experimental result is shown in the left panel. In both panels χerg = 0.43.

We see that the MC simulation matches the experimental data in Fig. 19. We also note that separation of experimental spikes into a fast initial peak followed by a slower portion, which is observed in many experiments, can be understood from the distinct rates of decay of the two separate ESLDs.

Parkson Chong has conducted experiments on the fluorescence of dehydroergosterol (DHE) in vesicle bilayers. The presence of regular sterol regions, decreases fluorescence because the DHE molecules are then widely separated. Chong found fluorecence minima at particular values of χerg. Many of these minima are sharp and correspond to the critical values of (Cr) of χergfor which there are superlattices.

Our MC simulations of the mosaic appearing in the vesicle membrane (see Fig. 17) provide predictions of the number of sterols that are in superalttices. In Fig. 20 we show the result of our calculation compared to Chong’s experimental data. We have plotted our results for the number of sterols in the superlattice subtracted from an arbitrary number, because Chong’s data show minima when most of the sterols are, presumably, in superlattices. 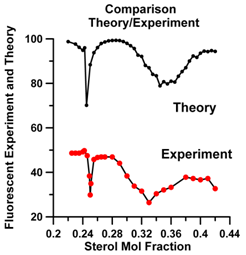 If we plot the percent sterols in each of theESLD types (superlattices) that we observed between χerg≈ 0.22 – 0.42 we obtain the plot shown in Fig. 21. 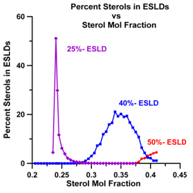 According to Chong there should be a maximum in the percent sterols appearing on the boundaries of the ESLDs (of the superlattices) at Cr. n Fig. 22 we have plotted the number of sterols on ESLD boundaries as a function of χerg. 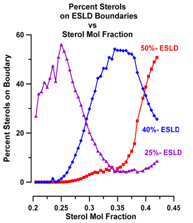 The requirement for a sterol to be inside an ESLD is more stringent than that for a boundary. This accounts for the fact that there are sterols on ESLD boundaries in regions where there are no sterols within ESLDs.

We have shown that our model produces the linear decay scheme we have consistently observed. We are also able to understand the fast and slow processes observed in terms of diffusion of sterols from different types of ESLDs.

Our model also predicts the results of the fluorescent experiments using DHE conducted by Chong. We also verify Chong’s theory regarding the percent of the sterols on the ESLD perimeters.

Our model explains why the fluorescent data at χerg = 0.33 do not form a sharp peak. The predicted superlattice at χerg = 0.33 is not observed. This peak results from an increase in the density of the χerg = 0.4 ESLDs. 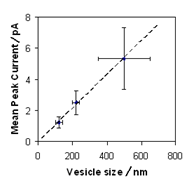 If the channels were evenly distributed over the vesicles the peak current, which is proportional to the number of channels, would be a linear function of the square of the diameter (area of the vesicle). However, if the channels are distributed around the perimeter of the ESLDs the number of channels would vary linearly with vesicle diameter. Our model then explains these data.

And our model has verified the Chong theory regarding the percent sterols on the ESLD boundaries.

We then have rather strong evidence that the arrangement of sterols (cholesterol and ergosterol) in membranes is such that superlattices are formed.

Why is this important? It is possible, and maybe even plausible, that sterol rich regions are necessary for the incorporation of proteins in cell membranes, and for other processes.