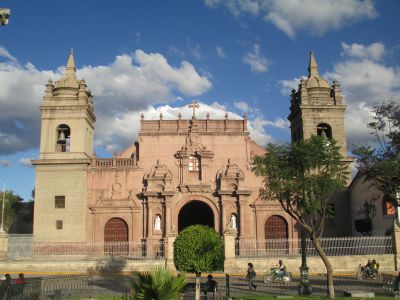 Ayacucho, the “stately city,” is the political and economic capital of the departamento (state) of the same name.  Locals call the city Huamanga.  Thirty-three catholic churches dominate the skyline, one for each year of Jesus’ life.  At 2,761 meters (about 9,000 feet) above sea level, the skies are clear and sunny most days, with warm temperatures and commanding views of the surrounding hillsides.  Ayacucho means “corner of the dead” in Quechua, a name given to the city by Simon Bolivar shortly after Peru’s war of independence against Spain was won on a battlefield nearby.  Sadly, the name became apt once again during the struggle between the Shining Path terrorists, led by a professor at the local university named Abimael Guzman, and the police and, later, the Peruvian military.  Of the 70,000 deaths attributed to this armed conflict in the 1980s and 90s, about half are believed to have occurred here in Ayacucho.  Today the city shows little evidence of this dark period in Peruvian history, but memories of loss and torment live on in the minds of those old enough to remember. 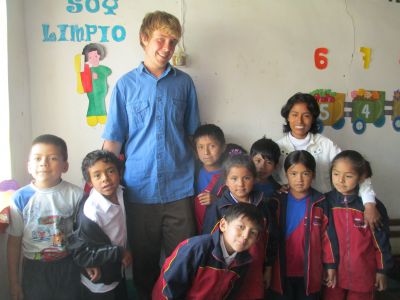 Micah volunteers at a small Christian elementary school called Colegio William Thomson.  Founded by his host parents, Pastor Dionicio and Elizabeth, the school’s motto is to “forge a new generation with values”.  Micah teaches English to each class — 1st grade to 6th grade — on a rotating basis.  The lessons are relatively simple, focusing on greetings, vocabulary and pronunciation.  Micah, referred to here as “Mike,” also assists with physical education classes each Thursday, helping the instructor maintain order during karate class and keeping the ball in play during soccer matches.  The teachers appreciate having an aspiring teacher to assist them in their classes and help with a variety of other activities (e.g. “Can you hang these streamers on the ceiling?”).  Micah’s can-do attitude and his playful manner go a long way here. 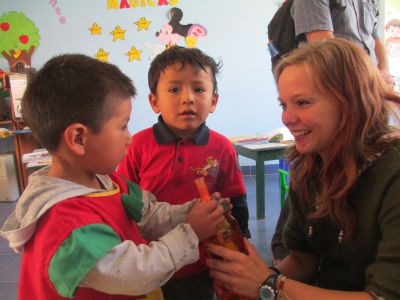 Andrea volunteers at a private Christian preschool at the edge of town.  Her host parents, Raquel and Maximo, founded Institución Educativa Privada Inicial Vidas (Life Preschool) several years ago to give a head start to children in this poor neighborhood.  Andrea volunteers in both the younger (2-3 year old) and older (4-5 year old) classes.  She teaches basic English (“Can you name this color?”) in the hope that early exposure to English words and sounds will help the students learn this difficult language once they reach their teens or even twenties.   She also gives individual attention to these attention-starved children, most of whom have little opportunity to spend time with their parents given the economic and social realities of life on the margins.  Andrea’s friendly, patient demeanor is an asset in the classroom and the children adore having her in their midst. 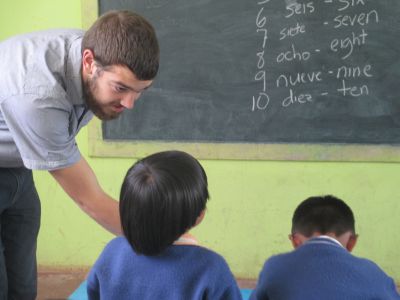 Benjamin’s assignment is at Iglesia Evangélica Presbiteriana Emanuel de Ayacucho (Emanuel Evangelical Presbyterian Church of Ayacucho).  Emanuel is Hebrew for “God is With Us”.  Pastor Juan has asked Ben to assist with a wide variety of tasks — in fact, Ben is given an updated schedule each week to help make sure he is in the right place at the right time.  In the mornings he moves from class to class in the primary school adjacent to the church teaching what so many Peruvians want to learn:  yes, English.  During recess he interacts with the children on the playground.  After school, Ben assists with office work.  Recently he was asked to type the lyrics of a 170-page book of praise songs into a Word document — in Quechua!  The church staff could not believe how quickly he accomplished this task.  Near the end of the day Ben teaches English to others, including youth from the church and the pastor himself.   And then there is the unexpected:  on the day we visited the street outside the school was packed with people attending the funeral of a mother and son who attended the church, a tragic event that rocked the congregation.  Ben’s sensitive nature and willingness to be involved however he can suit him well for this work.