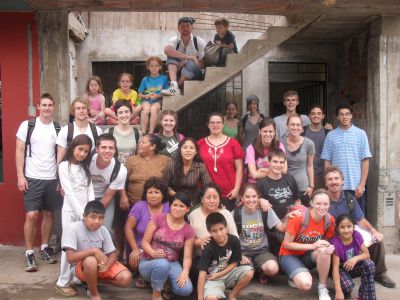 Most of Lima’s population is made up of recent immigrants from the Andes or rain forest who inhabit the “cones” located to the north, east and south of the city.   We began visiting the Southern Cone during the second week of the program to learn what conditions are like for people living on the margins — economically, socially, culturally.

The city of Villa Maria is over thirty years old.  The original estera (reed mat) walls erected by the first settlers have been replaced with sturdy concrete blocks.  The residents benefit from running water, sewer and electric hookups.  The neighborhood may still appear “poor” by North American standards, but we discovered a richness we had not expected.

Our plan for this visit included spending a day planting vegetable seeds in an organic garden, visiting a church and hearing a lecture by a well-known pastor and preparing an Andean-style barbecue called Pachamanca.  Doing all this required two days.  So we decided to do something we have not tried before:  spend the night with families in the Southern Cone.

Alicia has worked with SST directors for several years, cleaning up before and after the weekly Goshen Tambo meeting at our home.  In recent semesters we have asked Alicia to demonstrate how to use herbs in traditional medicine and to teach the students how to cook Peruvian specialties like Papa Rellena (stuffed potatoes).

When we asked Alicia whether we might spend the night in her neighborhood she was delighted.  She quickly inquired of her family members and found that two sisters — Martha and Carmen — and two daughters — Sara and Janette — were willing to open up their homes to small groups of students.

After working in the garden all day we split into groups and headed home with each family member, not sure what to expect.  The women prepared dinner and the students talked with their hosts.  Then other family members invited the students outside to play volleyball or just hang out and talk.  The scene was friendly and fun, and we realized that while the residents of this neighborhood did not seem as well off as those who live closer to the heart of Lima — in terms of material possessions and social status — they were open and willing to share what they have.

The next day we toured the church founded by a Dario Lopez, a local hero who earned a Ph.D. in theology at Oxford in England then returned to his home community, San Juan de Miraflores, to make a difference.  We learned about the struggle to bring peace in the aftermath of the civil war between the terrorists and military in the 1980’s and 90’s.   Then we toured the school rooms under construction upstairs.

For our last stop, we visited the home of Wilfredo, a.k.a. Willy, our new Service Guide.  He asked his brother and sister-in-law to guide us in the preparation of Pachamanca, a method of cooking that dates back thousands of years.  We began by collecting and washing dozens of rocks, then stacked them to make something resembling a stone oven.  The inside was stuffed with firewood and set ablaze.  After the fire died down and the rocks were very hot,  they were knocked to the ground so they would lie flat.  We immediately realized we wouldn’t be baking the food, but rather grilling it atop the stones themselves.

First came layers of potatoes, then sweet potatoes, then avas (a type of large bean), then huge chunks of beef (mostly ribs) and finally humitas (a sweet tamale made of corn meal).  Atop the food came layers of aromatic herbs, then corn husks and other materials to seal in the food.  On top of this we shoveled sand to hold in the heat and steam.  We waited for an hour then began carefully dismantling the pile and extracting its contents.  Delicious!