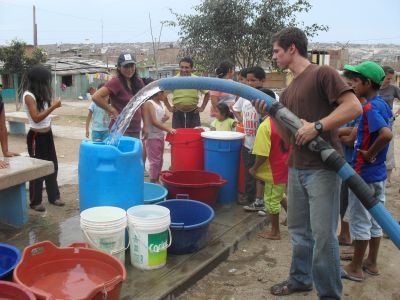 What do people living on the margins south of Lima need more than anything else?   There are many answers to this question, but the one that first came to mind for Corpusa is something basic and essential:  water.

Chavin de Huantar is a young neighborhood an hour’s ride from the city in a place called Villa El Salvador.  Corpusa and her husband were part of the “invasion”that took place here 10 years ago.  With hundreds of other homeless families, they showed up one day with construction materials in hand and divided the land into sixty-square-meter lots — each about 20 feet wide and 33 feet long.  Desperate for a place to live, they assigned the lots by lottery and began erecting homes in earnest without either title to the land or permission to build.

Most of Villa El Salvador’s 400,000 residents have settled here in a similar fashion.  Residents in some of the older invasions have been granted title to their land by the government.  With ownership comes the eventual provision of municipal services, including water, sewer and electricity.  Unfortunately, the process takes decades to complete and the residents of Chavin de Huantar still do not have titles.  As they await the government’s official acknowledgment of their presence they make do by connecting themselves to the electric grid using their own wires and electrical tape and placing plastic containers outside their homes to purchase water from passing trucks.

This is where we came in.  At Corpusa’s suggestion, our Service Guide, Willy, contacted the owner of a water delivery truck and asked if we could purchase an entire truckload and distribute free water to the neighbors.  Realizing it would not go very far in this thirsty neighborhood, we committed to four truckloads (the students later pitched in for a fifth).  We secured funds from a donor and arranged for our group to meet the driver and his assistant at a predetermined time and place.  We arrived eager to work on Friday morning.  After meeting Corpusa and hearing her story we headed out onto the dusty street to find the first truck.

Why does the driver need an assistant?  We soon found out.  On the back of each truck are two giant hoses used to dispense the life-giving liquid into the plastic containers at each doorstep.  Getting the water from the truck into the empty tubs and cans turned out to be more challenging than we imagined, a task requiring strength, coordination and a good sense of timing.  Without a shut-off valve, we soon realized the only way to stop the flow was to raise the hose above the water level inside the truck at just the right moment … or else get drenched.