Our second week began with visits to two massive iconic temples from Indonesia’s Hindu and Buddhist past. Borobudur was built about 760 AD and Prambanan was constructed about 100 years later. Although Borobudur is mainly Buddhist, it includes many Hindu elements which had entered the country much earlier, as well as elements of local indigenous ancestor worship.

Our guide at Borobudur pointed out the Bodhi trees which were loved by Buddha. The shape of the leaves on that tree were the inspiration for the bell shape of the stupas/monuments found in most Buddhist temples.

Prambanan is a complex of Hindu temples, the tallest of which exceeds the height of Borobudur. Our visit to Prambanan included many opportunities to interact with school groups wanting to practice their English and ended with refreshing drinks from young coconut.

On another day we visited the Sultan’s palace and museum in Solo, a nearby city to Yogyakarta. The palace in Solo was the original sultanate before the kingdoms of Solo and Yogyakarta split in 1755.

Other activities this week included visits to two Islamic centers, a Mennonite church involved in interfaith cooperation, and hearing a lecture on Islamic beliefs as practiced in different social contexts.

At a pesantren (Islamic boarding school) near Yogyakarta we heard about their activities with students and in the community to address social issues and also improve agriculture. Unfortunately our visit happened during a heavy rain and we were unable to visit any of their agricultural projects.

In Solo we met with Mennonite pastor Paulos Hartono and several of his collaborators who have found ways to work together to reduce religious tensions in the city. One main catalyst has been in working together in disaster relief and reconstruction projects.

We also visited an Islamic center near Solo that is involved in social programs and counselling. Following the presentation, and the usual sharing of snacks and drinks, we had time for interaction. We were able to observe the afternoon prayer time and then were treated to a short performance of Javanese Islamic music.

We ended the week with a lecture by an Islamic scholar, Ahmad Rafiq, who obtained his PhD from Temple University in the US and now heads the doctoral program at the National Islamic University in Yogyakarta. He helped us understand the relationship between social context and how Islam is practiced. 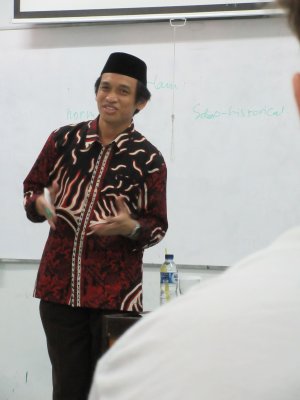