Cayambe, a very beautiful town in Ecuador that’s 1hr and a half away from the capital of Quito. Cayambe is also the third highest volcano in Ecuador, and not only that, it’s also right in the middle of the earth. It goes right through the equator line. This first picture is an image of what’s visible of cayambe. 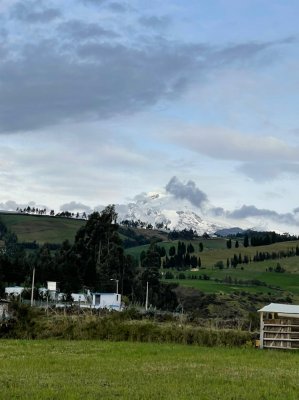 A lot of the Cayambe folks here are farmers who own land for cows, chickens, goats, sheep and flowers which are a main export from this region. The flowers are sent all over, to larger cities or other countries. A lot of the flowers we give to our mothers or loved ones come from farms here! How cool! But one story I’d like to focus on is my experience with cow milking.

I learned that my host family owns two plots of land: One for 3 dairy cows and 2 calf’s and one where they plant Choclo (corn). I get to go up to the first land every now and then and help with the milking. I’ve never done it before, so it was a completely new thing for me. My family was super kind to take a picture of me with Bosque (forest) , one of the calfs. He’s so adorable he likes the bottom of his neck scratched! 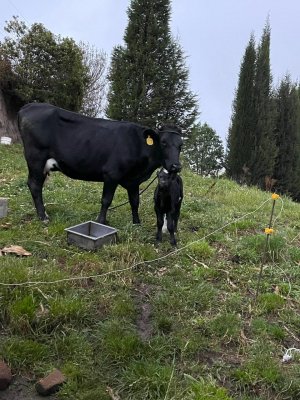 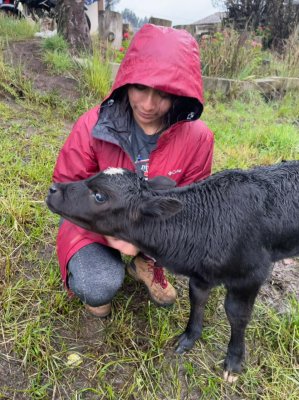 Here is the same calf with his mother, aren’t they cute! She’s one of the cows I got to watch being milked before I attempted. Let me tell you that milking works the wrist. And the calmness that washes over you when you’re in open land is a different kind of calm. Also, the altitude is very high, around 2830 m (almost the same as Quito) so the higher up the volcano you go the higher it gets.

After they have milked the cows, they put a special syringe in the milk to create the cheese.  Then, they  let it sit for about 4 hours  until a thick layer starts to form and that’s the cheese. In the picture you can see some of the cheese in  a bowl getting ready to be set aside for another 4 hours to let it dry. I learned that if you put salt on it, it hardens the cheese and makes it harder to mold. 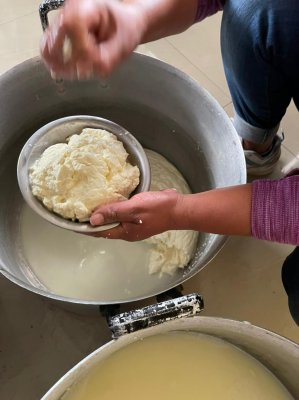 Even though I’ve seen a whole lot by just being here for 2 weeks I think milking cows is an experience that’ll stick with me. I’ve never done it before but I’ve also never done a lot of the things here in Cayambe that Ecuadorians do. This  last picture shows  a beautiful sunset you can find when you’re  up on the field. It took my breath away. 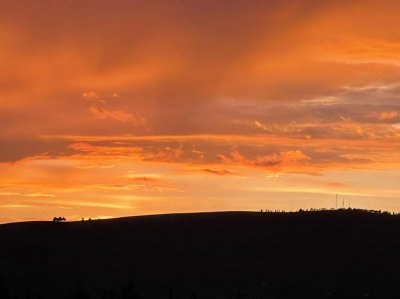