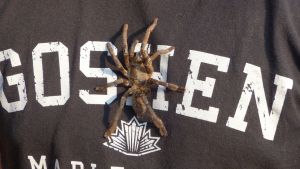 This is the third and briefest of three entries from our four-day trip to Siem Reap, so please read the additional entries on Angkor Wat and Kampong Phluck.

On the return trip from Angkor Wat, we stopped near Skuon, definitely the highlight of the 6 1/2-hour bus ride from Siem Reap to Phnom Penh. Skuon villagers are known for their level of consumption of deep-fried spiders, which apparently is greater than that of ordinary Cambodians. Legend has it that Skuon people began eating spiders in greater volumes during the Khmer Rouge period, when food sources were extremely scarce. Now they cultivate them for local people to eat for breakfast, lunch, or dinner, and for tourists who stop along the way.

As shown here, many in the group allowed the live, Tarantula-like spiders to crawl on their bodies before tasting some of their fried siblings. Deep-fried spiders taste a little like burnt french-fries or about any other similar fried food. A few tasted not only the legs but also the squishy, webby bodies, which take a stronger stomach to consume.

Henry did a Cambodia SST first: he put a live spider in his mouth long enough for a number of us to take photos. The image with the legs hanging out of his mouth depicts the live spider interaction.

The last two photos are from this morning. After arriving back in Phnom Penh around 6:30 last evening, SSTers started showing up at the Graber Miller apartment at 6:30 a.m. today to watch the Super Bowl. We were joined by Mennonite Central Committee service workers Daron and Kirstin Docken Showalter and Serving and Learning Together (SALT) volunteer Warren. Daron Showalter was in Keith and Ann’s 2002 SST group in China, and he and Kirstin have been extremely helpful in recommending lecturers, field trips, host families, service locations, and other components of SST. Because of the events described below and today’s national holiday, most businesses were closed today, including sports bars that would have otherwise been showing the Super Bowl.

Be sure to read the additional entries on Angkor Wat and Kampong Phluck. As I finish up this blog, the King Father, Norodom Sihanouk, who died in October, will be cremated on a majestic pyre near the waterfront in Phnom Penh (photos of that in tomorrow’s blog). The King Father was deeply revered in the country as the father of independence, and his funeral rites have been going on since Friday — four days of rituals, with visiting dignitaries from around the world. Tourists and local Khmer people are not able to get near the site, purportedly for the security of foreign leaders. Tomorrow we’ll put up another general blog about day-to-day lectures.