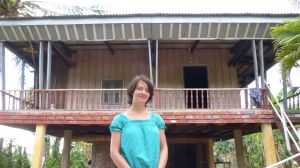 This week the Graber Millers visited Carina and Maryn in Sbov, a Khmer Muslim village a few minutes from Kep on the southern coast. Given the beauty of the area, the Graber Millers stayed a couple of extra days in the coastal town of Kep for a mini family vacation.

Carina and Maryn also enjoy the natural landscapes of Kep. Hills that are part of Kep National Park rise up from the Gulf of Thailand and provide challenging walking trails suitable for birding, animal-watching, and vista-viewing. Nearly every day Maryn and Carina ride to a nearby guesthouse, park their bikes, and then hike along the trails before relaxing at the beach for a short time.

Back in Sbov, which is just off the highway, Carina and Maryn teach English at the local Islamic school. Maryn’s brother-in-law, whom they refer to as Bong Rien (Older Brother Teacher), teaches Islamic history and beliefs later in the evening, and Maryn and Carina teach English for an hour each evening to beginning learners, including one brave 28-year-old who comes to classes faithfully with the school-age children.

Maryn’s family has a deep connection to Goshen’s Study-Service program in Cambodia since her host parents are the parents-in-law of Sen Marya, our local assistant in 2010 and 2013. Marya and her husband, Oumuet, made the arrangements for the women to stay in Sbov after plans for working with another NGO in nearby Kampot fell through in the days just before students left for service. Maryn lives with Oumuet’s Ma and Pa as well as one sister (Bong Srey) and a slightly younger brother, who is just finishing high school. Oumuet’s other siblings are now scattered around Cambodia.

Maryn’s family raises ducks and cows and one turkey, and they live in a concrete home with a tile floor. Maryn has her own room and gets a good diet of greens, fish, rice, and other Khmer delicacies.

Carina lives across and down the road, right on the highway, in a wooden structure. In front of their house the family runs a little shop serving neighbors and others who pass by. Carina’s family also has two cows and rice fields behind the home. Inside the house were four large bags of rice (ong-gor) that they anticipate will last the entire year, plus another large, round basket container of rice (s’rou) for next year’s planting.

Carina shares a bedroom with her two sisters, Navy (18) and Vary (21). Out the bedroom window she has a beautiful view of rice fields and cow pastures spreading for kilometers. Other neighbors and friends wander in and out of the property regularly. When Ann, Keith and Mia visited her home, Carina’s sister Vary wanted to have her photo taken with Mia, since it was so unusual to see an American girl who was born in China. Mia took most of the photos here, except for the one of her and Vary.

Both Carina and Maryn seem content in their beautiful environment. They and all of the SSTers will be back in Phnom Penh a week from today for a few days of retreating and dis-orientation.

On Saturday Ann and Keith will visit Brett and Nate here in Phnom Penh, where they have been doing their service. Watch for one more service post about them after the weekend.