Saying goodbye is never easy- especially after spending our days interacting with the wonderful kids and staff at the Peace Academic Center. However, the last day of camp caught up to us quickly. We decided as a group to watch a movie with the kids, and landed on the Disney film, Soul. On Friday morning the kids came running off the bus for the last time, and I tried not to let my emotions impact the fun of the last day. We played four square, reading monster, and pushed kids on the swings one last time. I knew that I was going to miss hearing Jordan scream during four square, or seeing Belinda’s quiet smile while making crafts, or Keyan continuously trying to wear Landon’s bucket hat. I knew these kids were special.
Time kept ticking, someone started the movie, and Anna Smuker and I went to the kitchen to vigorously start making mounds of popcorn and cookies. (This took the entirety of the movie since the microwave broke and we had to use the stove.) Once we finished, Lance came over and cooked hot dogs for everyone. We ate in little circles, talking with the kids. Belinda and Waldina told me they had a surprise for me, and handed me homemade drawings and an “S” necklace they got at the store, which of course melted my heart. After lunch we did one final water game with flying wet sponges before we dried off for a group picture. Then the dreaded goodbyes began. I hugged and high fived the students as they went to the bus, and Belinda asked if I could take her in my suitcase. It was a bitter sweet sentiment to end on. I am grateful for the opportunity we had to connect with these kids.

After we cleaned up the place, we said our goodbyes and thank yous to our leaders Lance and Kay who we had gotten to know over the weeks through hearing their stories and spending time with them. We then packed into our vehicles and hit the road.

The first night we drove about five hours to Albuquerque New Mexico where we stopped and had a celebratory dinner at a nice Mexican restaurant in town. We even snuck birthday candles onto Elizabeth Reimer’s plate! Then we crashed at a hotel for a quick turn around. The next day we got up and drove 12 hours to Topeka Kansas where we swam in an indoor pool and chatted in our hotel rooms, sharing memories from the trip. Some of us knuckleheads decided that we wanted to get up at four the next morning for our last stretch of driving from Topeka to Goshen. After a long 13 hour drive with stop and go traffic in Chicago, we finally made it back to Goshen! What a tiring, exciting, impactful adventure it has been. Thanks to our wonderful leaders Kendra and David for their amazing support and leadership throughout our time in the Southwest. We are so thankful. 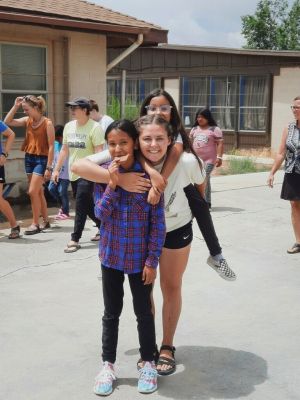 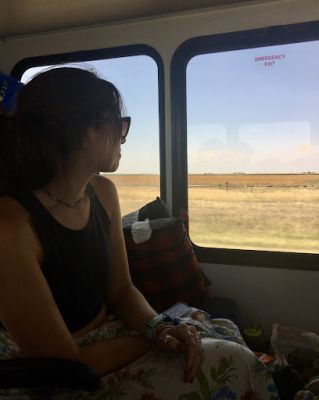 Hayley Bickford looking out the window at Kansas terrain. I convinced her to do a mini photo shoot with me on the bus to help bust boredom. 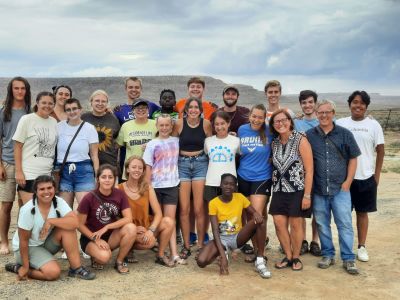