Indiana seniors: Apply Sept. 20-24 for a chance to win a $500 scholarship! Learn more->
Goshen College Blogs  —  Native American Culture & Health and Welfare  —  Read to your kids, read to your grandkids, have them read to you
Share Tweet Email

Natalie Hazbun is a senior social work major and the author of this post.

Reading, other than math, is one of the emphases of the Peace Academic Center. Reading camp started out with the usual routine of the bus picking up the kids, and as kids started showing up, GC students engaged them in playground games. Once everyone had arrived, we started our craft activity. Each kid wrote out the alphabet and then drew something that represented each letter. The craft was followed by more playground games, music time, and lunch. After lunch, Meagan Gutierrez, senior English Ed major led an evaluation of individual kids’ reading levels, starting with the youngest kids. One thing we were told before camp started is that there was a wide spectrum of reading levels among Peace Academic Center students, with some students well beyond grade level and some well below grade level, so we should not group kids by age nor by reading level. After some brief evaluations of some of the kids, we ended the day with a water game.

Tuesday after lunch, we engaged the younger kids in a scavenger hunt looking for books about or with a certain item, such as “about a boy”, “with a color in the title”, or “about a fish”. After the kids, who worked in pairs and with a GC student completed their task, the GC student read the 4 or 5 books to the kids.

One afternoon a couple of us played some basic reading games with the kids, having them practice skills like rhyming and matching words to pictures. On Friday, we changed the routine up a bit with a movie (Soul) in the morning before lunch, followed by bingo. The younger kids played rhyming bingo. To win they had to match the word called with the rhyming word and get 5 in a row. The older kids played regular bingo, but modified, so if they won, they had to give a synonym or anatomy for a word that the GC student chose. The day closed out with a water game, bucket brigade, in which both campers and GC students competed in 2 teams to transfer water from a full bucket to an empty bucket using a sponge tossed from person to person down a line with the last person squeezing it out, then running to the back of the line to start again. 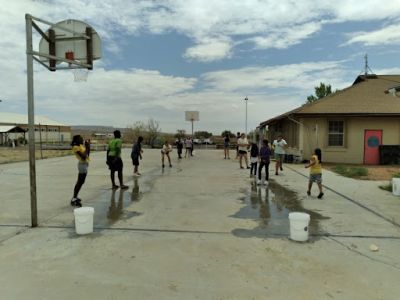 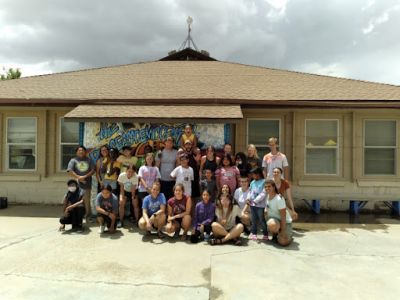