Hayley Bickford is a senior majoring in Psychology with a Business minor.

After a long week of math camp, we escaped to Utah for a weekend retreat. We woke up early Saturday morning to head out. On our way, though, we stopped in Shungopavi Village, as we were invited to a Kachina Dance. This was a very special thing, as this ceremony is very important to the Hopi people. As much as I would love to go on and on about this experience we had, I’m not really allowed to. This is a very sacred ceremony, and it is against the rules to take pictures of anything in the village, let alone describing what we saw. We watched the dance from the rooftops of the buildings in the village. I cannot stress this enough; this was an incredible experience, and we are very lucky to have been invited.

Once we left the village, we were off to Utah. I was on the bus, and while it isn’t my favorite form of transportation, the large windows offered ample opportunity to see the changing terrain. Utah was green and full of life; much different than the multicolored sands we had been living with on the reservations. We drove through Bryce Canyon to head towards Kodachrome Basin State Park. There, we had canvas tents already set up with a large bed inside. There were mountains, layered like lasagna, surrounding our campsite. After we put all of our things in our respective tents, we set off to explore. Right behind us was a rather large, red mountain that some people had already summited. The rest of the group quickly joined, but some of us had more trouble than others. What’s an SST blog post without a quick injury story? I was leading a charge up one side of the mountain when tragedy struck. The rock I was holding broke and hit me in the face, sending me down the mountain on my stomach a couple of feet. I caught myself so that I could get down in a more conventional way. At the end of the day, I left with a mild concussion, a new scar on my forehead, and some scrapes on my legs.

Despite what TLC said, we spent Sunday chasing waterfalls. We said goodbye to our campsite and drove over to Calf Creek Falls. When we arrived, we slathered on our sunscreen and headed to the Lower Falls Trail. This was around a 6-mile roundtrip hike, so we knew we were in for a long day. After a long, hot hike, we made it to our goal. The end of the trail boasted a huge waterfall with a swimming hole at the bottom. We stripped off our clothes into our bathing suits and ran into the icy water. Despite how absolutely freezing it was, we were extremely refreshed. We ate lunch on a slimy rock wall and spent the afternoon swimming around. The hike back was less than enthusiastic, but we saw one petroglyph, something that we weren’t expecting in this area. Once everyone had finished the hike back, we piled into the cars and started to head back. Since we were in Utah and not on the reservation, we were able to eat dinner in a restaurant as a group. We stopped at the Thunderbird Restaurant. I won’t say anything more about the choice, but if you have the time, you should look it up! We left with stomachs full of pie and headed back to the Peace Academic Center, looking to start up reading camp. 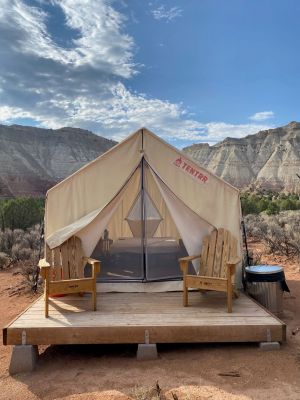 The Tentrr, that we slept in Saturday night in Kodachrome Basin State Park 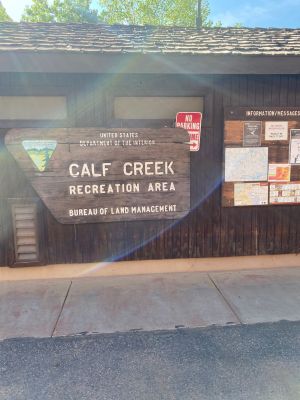 The sign at the start of the Calf Creek Falls trail 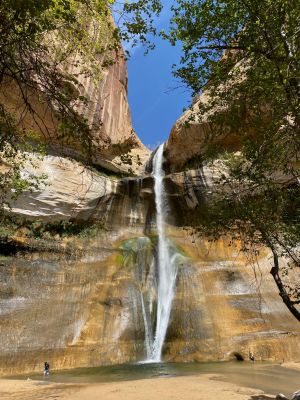 The falls, that we chased after 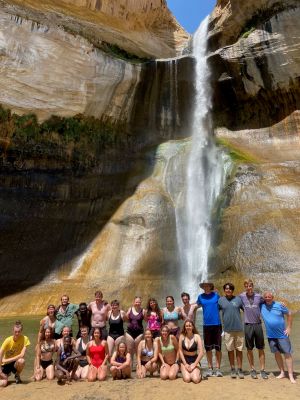 Group picture in front of the falls