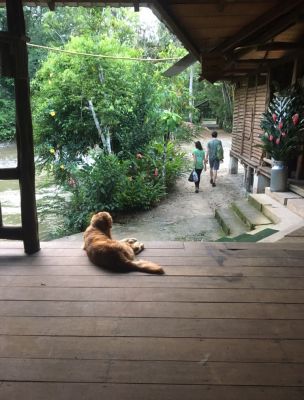 After a complete day of travel starting from the small village of Zábalo at 7:33 AM, we arrived in the city of Tena at approximately 9:30 PM. The first leg of the journey was filled with word games and conversation in our large fiberglass motorized canoe, and the second a relaxing bus ride (having to stop only shortly for a tire change). Upon arrival at the ‘jungle-chic’ establishment that is Establo Tomás- or Thomas’s Stable- we were greeted with fish dinners and our bags of clean laundry. The latter was truly one of the best welcomes after a few days of perpetually damp clothing in the jungle. I’ve realized that fresh-smelling clothing is one of the plethora of things I normally take for granted.  For now, at least, we’re back to the land of WiFi and laundromat availability.