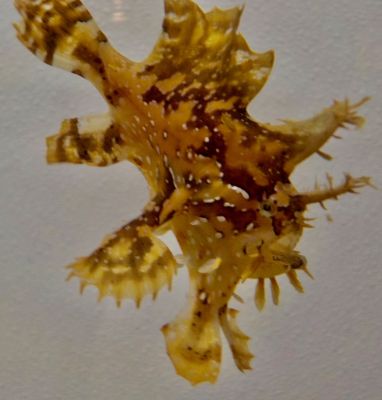 Today, our class experienced the diverse weather conditions of the Florida Keys in a very intense fashion. Midway into our boat ride to Triton Flats this afternoon, we realized that it was far too windy outside to be conducive to snorkeling, and were forced to turn around and return to Layton. However, this trip wasn’t for naught, as the choppy water made for great entertainment as the students at the front of the boat got substantially splashed, much to the delight of our instructor and TA sitting at the back of the boat. Additionally, we took this opportunity to collect some Sargassum en route, using dip nets to collect several bucketfuls of the brown alga and bring it to the lab for analysis. This was indeed a fruitful pursuit, as we collected arguably two of the cutest specimens of the trip thus far, small versions of Histrio histrio, a fish, and Portunus sayi, a crab, both of which inhabit these dense algae clusters.

After an afternoon of sifting through piles of algae, we had our first communal meal of this May Term. Usually, the cooking here in Layton is done in groups, with three or four students cooking a meal for themselves. These meals often take the form of a stereotypical college meal, based on rice, pasta, or other inexpensive foods. This isn’t to say that we don’t eat well, as groups this week have made exotic dishes such as eggplant parmesan and a stir-fry including fresh-caught Mangrove Snapper, compliments of Oliver Wisseman! In addition to this, we eat a meal as a whole group once a week, and each normal cooking group contributes a dish to the meal. Tonight we had a classic summer meal of brats, hamburgers, pasta salad, chips, and vegetables. We enjoyed this spread to the setting of the warm Florida sun, eagerly awaiting the next two weeks of research and fellowship!