With only hours before heading out to the wilderness, our group was faced with a very unknown but potentially crucial decision: what kind of canoes will we take on the water? 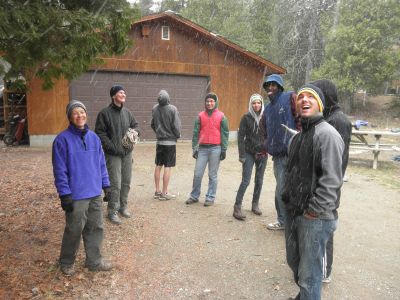 Students observe the snow as the weather shifted from sunshine to snowfall, 40˚F to 30˚F and back again, all within a matter of minutes.

While there are many different styles and materials to make canoes with, Wilderness Wind outfits their guests with only two options.  Our group had to decide between the bulky and sturdy aluminum canoes, or the light and nimble Kevlar canoes.

Both have distinct advantages in certain circumstances, however our guides and the staff at Wilderness Wind agree that this is a highly unusual trip to be planning for.

According to the Forest Service as well as a number of bloggers from the Ely area, the majority of the lakes are still covered in ice.  Some have white ice which will take longer to melt, while lakes with thinner black ice might even clear up by tomorrow morning.

Nevertheless, that puts Goshen College students in a particularly odd situation, considering the tradeoffs between aluminum and Kevlar.  Aluminum could crush through floating ice without getting punctured, but weighs about twice as much as Kevlar and would likely conduct the water’s cold temperatures much quicker than the sun’s warmth.

Ultimately, we decided as a group that Kevlar would still be the better of the two, and that if we ran into any ice that we would simply camp and wait for a day.

Personally, this was the decision I was hoping for, since our group is already taking seven 20-35 lb food bags.  An extra 35 lbs of canoe with my 40 lb pack might be a little difficult over even shorter portages.

Since today was originally the day we were going to hit the water, we decided to use it as a day to regather our energy and pack our food for the trip.  When we heard the forecast earlier this week calling for snow and high winds today, it became clear that we should wait another day. 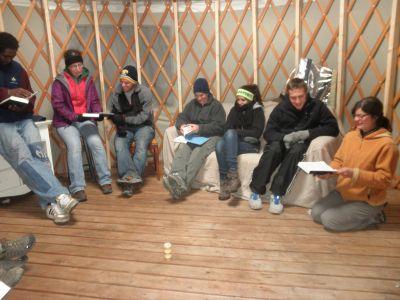 Students singing hymns in the yurt during our “farewell” worship service.

As per tradition of Wilderness Wind, we held a small worship service in the yurt before dinner.  After a few hymns we listened to a short message given by Stan Bontrager, the current director of Wilderness Wind.

His message was about approaching the wilderness, and comparing how humans have done so in the past.  While many people set out to dominate nature, they end up finding that in a big world they are quite small.

However, Bontrager said, we can also choose to embrace nature and become a part of it.  In doing so, we can understand more about creation, the creator, and our place in between.

We have a long journey ahead of us, with many unknowns–but hopefully, we will find a connection between us and the Earth in the process.  I won’t be able to blog about it until our return, but I will nevertheless tell the story.

In the meantime, see if you can make your own connection to the Earth.  While a trip to the Boundary Waters is a truly Earth-shattering experience, it isn’t the only way to reconnect to the Earth.

Take a trip to a state park, or go fishing out by the river; go for a picnic in Shanklin park or even a short bike ride.  Simply get outside and get into nature–you might learn more than you were expecting in the process.

Wish us all the best!