A typical molecule of biodiesel looks like the structure below. Mostly it is a long chain of carbon atoms, with hydrogen atoms attached, and at one end is what we call an ester functional group (shown in blue).

Diesel engines can burn biodiesel fuel with no modifications (except for replacing some rubber tubing that may soften with biodiesel). This is possible because biodiesel is chemically very similar to regular diesel, shown below. Notice that regular diesel also has the long chain of carbon and hydrogen atoms, but doesn’t have the ester group shown in blue above.

Actually, the first diesel engines didn’t run on “diesel” fuel, but on vegetable oil, a sample molecule of which is shown below. Notice that it also has the long rows of carbon and hydrogen atoms, but is about three times larger than normal diesel molecules. It also has ester functional groups (in blue), like biodiesel.

That larger size of vegetable oil means that in cold weather it gels, making it hard to use in an engine. Converting it into biodiesel makes it a smaller molecule, closer to the size of regular diesel, so that it has to get colder than vegetable oil before it starts to gel.

Vegetable oil, like biodiesel, belongs to a category of compounds called esters. Therefore, converting vegetable oil into biodiesel is called a transesterification reaction. Doing this reaction requires using methanol (shown in green), which causes the red bonds in the structure below to break. This breaks off the blue section, like a backbone on the molecule, which becomes glycerol. The red bonds that did go to the glycerol backbone are placed with bonds to methoxy groups, shown in green in the final structure, that came from the methanol: 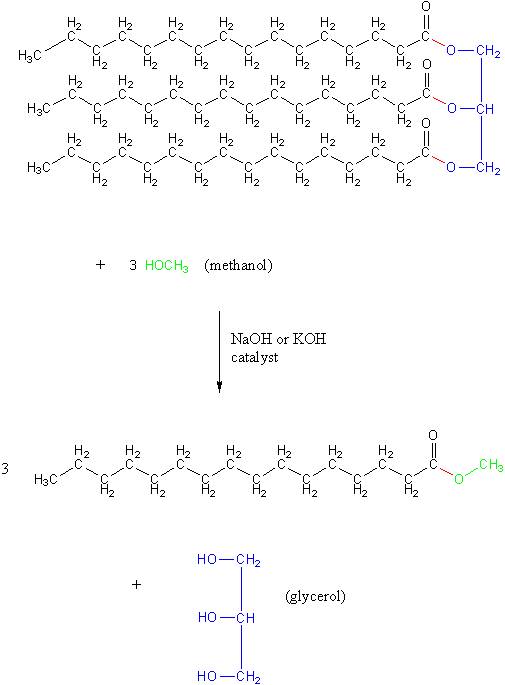 Other Steps in Making Biodiesel

Making good biodiesel requires several other steps besides the transesterification reaction. The first is to remove any traces of water in the vegetable oil. If this is not done, the water will later react with the vegetable oil in the reaction and make soap, shown below.

If soap gets made, then later it complicates the steps after the transesterication reaction that are needed to separate the biodiesel from leftover methanol, the NaOH or KOH catalyst, and the glycerol byproduct. To see how all that is done here, follow this link to learn about the GC biodiesel processor.