The process of making biodiesel at Goshen College follows plans published in the book “Biodiesel: Basics and Beyond” by William Kemp.

Below is a schematic of the main components for the processor. 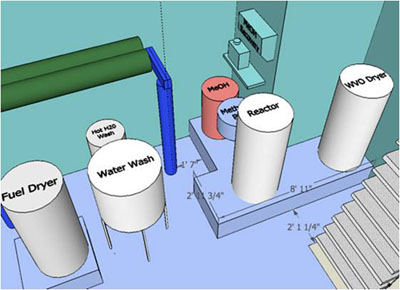 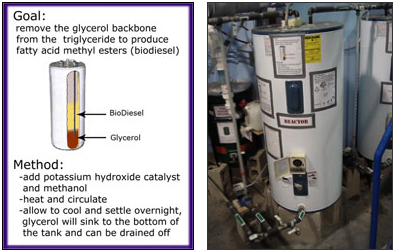 The second tank, the reactor (also a converted water heater), is where the dried oil is mixed with methanol and potassium hydroxide, which are delivered from some smaller tanks behind the reactor. Several steps actually happen in this tank, of which the first is the reaction itself. Then the process starts for purifying the biodiesel from the other chemicals present, starting with the glycerol by-product. Since glycerol is mostly insoluble in biodiesel, it separates into a separate layer that sinks to the bottom of the tank.

After the glycerol has been removed, the next step is to remove the leftover methanol.

The third tank is for washing the crude biodiesel. Here the KOH catalyst we use is removed, as well as small amounts of glycerol that remained dissolved in the biodiesel.

After the third tank the biodiesel is free from methanol, glycerol and catalyst that was left after the reaction. However, the biodiesel contains some water in it that was used in the previous step for washing the biodiesel. The fourth and final tank (also a converted water heater) is for drying the product, yielding biodiesel that is now free of impurities.

The final product is a clear, light yellow liquid. It looks very much like unused vegetable oil. 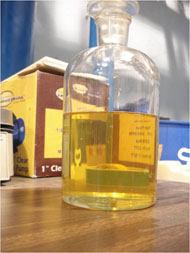