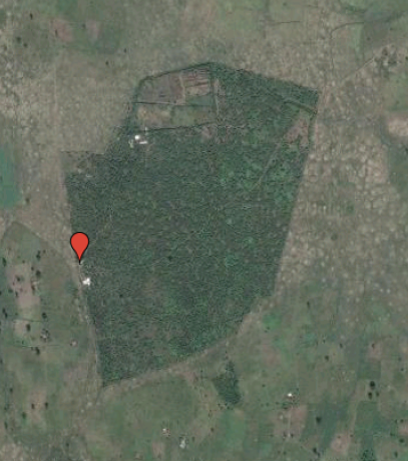 During Study we spent several weeks exploring development and social change. As part of this focus we visited two social change projects, the Beer-Sheba Project and the ONG des Villageois de Ndem. The Beer-Sheba Project is a Christian based initiative that combines a sustainable agro-forestry program together with holistic training and an agricultural resource center for young Senegalese farmers. The project is based in a 100 hectare plot of land that has been managed as part of a natural regeneration and reforestation strategy. The satellite image below gives a sense of some of their success. Working in and around the trees the project experiments with shade agriculture and incorporates a variety of other small enterprises including a charcoal project using tree trimmings and animal husbandry (beef, chickens and hogs). During our visit students had a tour of the project and then worked digging trenches, gathering fruit and pulling weeds in the garden.

The ONG des Villageois de Ndem, is a Muslim based NGO that has emerged out of the work of Babacar Mbow and Soxna Aïssa Cissé who returned to the village of Ndem, Mbow’s natal village, in 1983. Babacar Mbow is a spiritual leader of the Baye Fall, an order within the Mouride Brotherhood that views labor as a primary means of spiritual expression. Over the past 30 years a variety of initiatives have emerged under Babacar and Soxna’s leadership that include establishing a water source that now supplies 7 villages, the construction of a health clinic, a school, a variety of agroecology projects (including most recently a zoo!), and a collection of entrepreneurial activities that focus on both local markets (fresh food from the garden) and international markets (a variety of artisanal products, especially textiles). During our visit we received a tour of the village and then spent several hours sitting and learning from the Baye Fall.