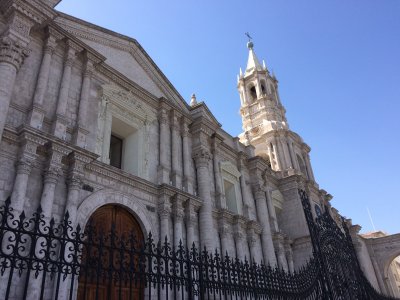 Bryce, Sharada, Jehan and Yejin are living in Arequipa, the second-most populous city in Perú, with just over 1 million inhabitants. The city of Arequipa is located in southwestern Perú, between the coastal desert and the Western Andes. It is surrounded by three volcanoes and is a popular tourist destination because of its beautiful natural scenery as well as its many colonial structures made of white volcanic stone called sillar.

Bryce is building a website for Policlínico Vásquez, a private clinic that has been a long-time partner of Goshen College’s service program. Sharada is assisting with physical therapy for children through Medical Mission International (MMI). Jehan is working at Hogar San Luis Gonzaga, a home for boys run by Inabif, a government agency working for the well-being of families, with a focus on at-risk children, adolescents and seniors. Yejin works with the youth orchestra in Arequipa’s chapter of Sinfonía por el Perú.