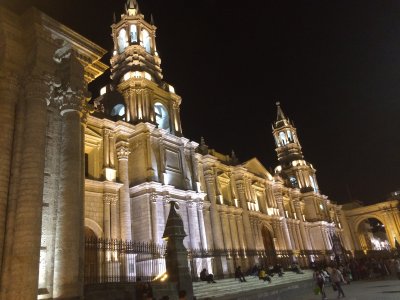 Nick, Manisha, Mariane and Erin are living and serving in Arequipa, the second-most populous city in Perú. The city of Arequipa is located in southwestern Perú, between the coastal desert and the Western Andes. It is surrounded by three volcanoes and is a popular tourist destination because of its beautiful natural scenery as well as its many colonial structures made of white volcanic stone called sillar.

Nick and Manisha are working at Colegio San Francisco Rojas, a private, bilingual Christian school. Nick is assisting in the office and helping with the school’s website, and Manisha is assisting in English classes for primary students. Mariane is working at Policlínico Vásquez, a private clinic offering services in general medicine, gynecology, gastroenterology, pulmonology and other specialities. Erin is tutoring children at Albergue Chaves de la Rosa, a residential center run by the Public Beneficence Society of Arequipa that is home to around 70 children.