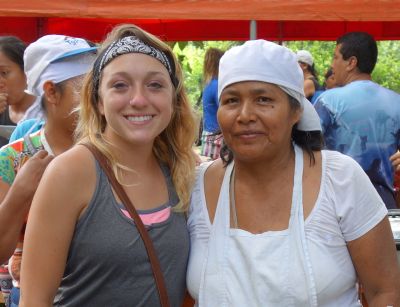 San Roque, where these three students are doing their service, is most notable for its size; whereas Ayacucho, Cuzco and Arequipa are major cities of several hundred thousand people, San Roque’s population is a mere 800.  Another significant difference is altitude; rather than being in the high Andes Mountains, it sits down in the hot, humid lush Amazon basin; there are more shades of green than you can count.

After a 45-minute taxi ride from the airport in Tarapoto to the village of San Roque, the 3 students met Maria and Doug for a hike to the chakra (farm plot) of Katie’s host family.   Her father, Avelino, showed us where they grow coffee, cacao, beans, corn, and more, plus a pond for raising tilapia.  The chackra produces food all year long, making the family almost entirely self-sufficient, which we saw at lunch in Katie’s home with her mother Esperanza, brother Heber, sister-in-law Angelica, and their daughter Greise.

While the students spend some time working with their families in the chacras, their main projects include teaching some English classes and creating a syllabus for an ecotourism course to be given to locals who will take tourists on guided tours.  While the English courses are taught in residents’ homes or at a shelter in the town’s park, much of the work on the ecotourism syllabus happens at “the rock,” a large flat boulder at the Cumbaza river that serves dual purposes as an executive desk and a diving platform for taking refreshing dips.

For supper Friday evening we ate with Josh’s family, including his father Heiser, mother Mirlanith, and brothers Brayan and Gino.  Because the family’s oldest son, Kenlly, wasn’t home that night, we were invited to return the following evening for another supper with the family.

On Saturday morning we had breakfast at the home of Riley and her host mother Lisseth.  Because Riley’s host father Juan was gone taking care of his elderly father, we didn’t get to meet him until the following day.  Breakfast included a traditional beverage made from dried and ground plantains and peanuts.

The families of the 3 students had been telling them for weeks that they should make a trip to the neighboring town of Lamas, known for its castle (built recently) and being home to some indigenous Amazon groups.  The students and Doug spent most of the rest of the day on this trip, including a visit to a museum on local culture, when Riley could show us a sample of a (cooked) large-winged ant that locals (and Riley) have eaten for its medicinal properties.

Sunday was a big event day in San Roque; annual races of varying distances through the mountainous jungle are sponsored by an outside organization, with local residents helping prepare for the event and cooking food to sell.  Josh and Maria both participated in the 10 km race, which included steeper ascents and descents than anything either of them had ever run before.  Because of a misplaced sign, Josh got to run an additional 10 km bonus leg, and for no extra cost.