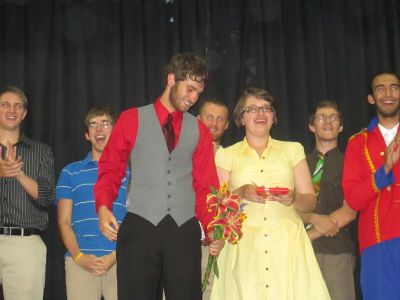 All good things must come to an end, including the study portion of the Spring semester Study Service Term in Peru.  We ended our time in Lima with a Despedida, a party to say thank you to the host families, language instructors, coordinators and others who have supported the students during their first six weeks in this marvelous country.  The program featured a drama written and directed by Bivi Goto, a professional actress gifted with energy, creativity and a sense of humor.  The play featured the true story of General San Martin, a leader in the South American independence movement, and the well-known legend of the origin of the Peruvian flag.  In addition to the drama, the students shared several original songs, a poem, a Judo demonstration and some funny jokes.  Afterward we enjoyed refreshments from two continents:  North American sandwiches, puppy chow and punch and South American chicken, corn and cheese appetizers, fruit salad and cake — an unlikely but delicious combination!