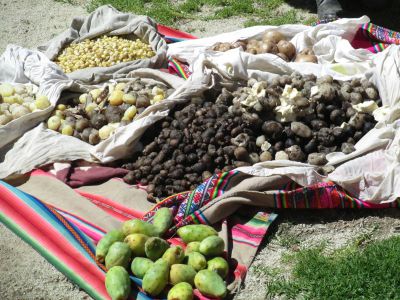 The Andes mountains are home to tens of thousands of small villages, where families live and work much as they have for centuries, even millenia.  Subsistence farming is the common profession.  Sometimes people grow enough potatoes, corn or habas beans to produce a surplus to sell in the market.  But often they simply grow what they eat and eat what they grow.  The food is natural and healthy — chemical fertilizers and pesticides are expensive and have not reached the remote areas.  Rural electrification projects have connected many of these places to the regional grid.  But the expense of electronic gadgetry and the strong sense of community mean that on a given afternoon villagers are more likely to gather in the market or compete on the soccer field than they are to stay home entertaining themselves with television or the internet.  Life in these mountains is simple, friendly and bound by tradition. 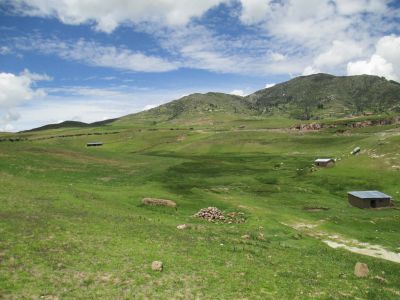 To get a glimpse of village life in a remote part of the Andes, we traveled eight hours to place called Colquemarca.  The village has a “wild-west” feel to it — people here wear leather boots and felted, broad-brimmed hats.  Many small, informal gold mines dot the landscape.  The name Colquemarca is Quechua for “money place” and people have been finding gold in these hills since the Spanish arrived in the 16th century.  Horses are quickly giving way to motorcycles, but you can still see people riding into town on horseback for Sunday market.  This region has a reputation for frontier justice; disputes between rivals are traditionally settled in the fighting ring during specific times of the year — both men and women participate in these refereed, full-contact duels. 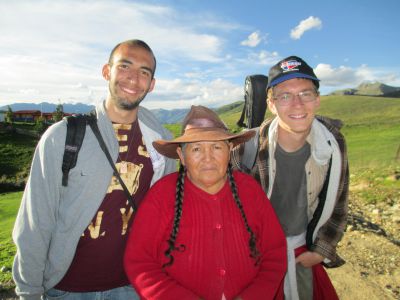 A church was planted in Colquemarca six years ago by Mennonite missionaries from the Cusco area.  The local leader, Pastor Raul, asked the members of his small congregation if they would be willing to host our students in their homes for several days.  The response was positive and we planned a long weekend trip to Colquemarca.  We loaded up the bus with enough clothing and water for three days, a dozen over-sized loaves of bread as gifts for our hosts and the kind of excitement that comes whenever one is trying something new — and is not exactly sure what to expect.  Our trusted driver, Hugo, started up the engine of his Brazilian-made, 34-passenger Volkswagen bus and we began the slow climb up, down, up again, then down again until we finally reached our destination. 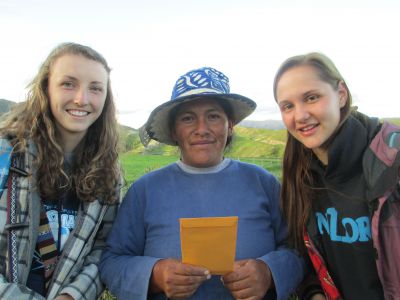 As we approached Colquemarca, students were divided into pairs and we began dropping them off at predesignated meeting points.  Two-by-two, the students greeted their admittedly timid hosts and then followed them back to their homes — small adobe buildings tucked between fields with commanding views of the broad, fertile valley.  Most of the students soon realized that they had been given the best room in the house;  their host parents or siblings would sleep in another room during their visit.  The students also received the biggest portion of potatoes, corn, beans, perhaps even beef, when meal time came.  A general observation, which was certainly true in Colquemarca, is that the more humble the family, the more generous they become when guests arrive. 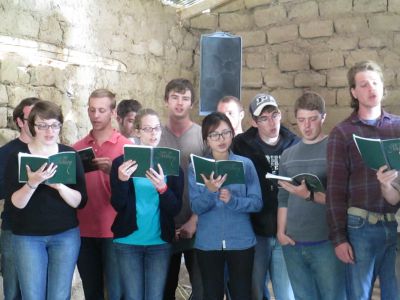 On Sunday we had the privilege of worshiping together in an adobe sanctuary built just last year.  The service opened with Quechua praise music, including lots of jumping and spinning.  Then came time for special music — that was our cue.  The students sang three numbers from the Sing the Journey hymnbook and the women finished with a fourth.  Then the directors’ daughters played their violins.  Next came a teatro, an enactment of the Good Samaritan story, complete with improbable robbers, an unsuspecting traveler and a woman who would not normally be trusted, due to her ethnicity, providing needed assistance to the victim of the crime. 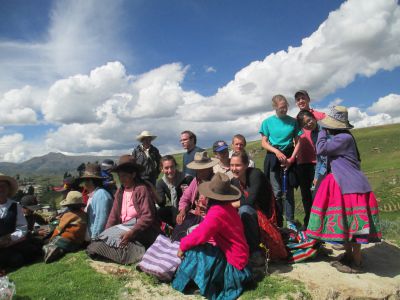 We were accompanied on our visit by Pastor Roberto, recently elected President of the Evangelical Mennonite Church of Peru.  Pastor Roberto is witty, outgoing and quickly puts the locals at ease with his native Quechua.  We asked him to pray for us and the children of the congregation before we invited the young ones to join Jane and a team of students outside the sanctuary in their first ever Escuela Dominical (Sunday School) program.  Meanwhile, Jerrell shared a message entitled, “Loving our Enemies,” based on passages from Jesus’ Sermon on the Mount as well as the twelfth chapter of Paul’s letter to the Romans. 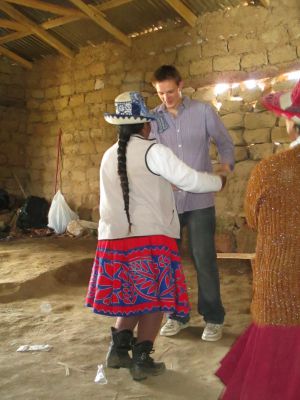 Afterwards the whole congregation filed outside for a mesa compartida(shared meal).  The women laid out large mantas (woven blankets) on the ground and one-by-one poured cooked potatoes, chuño (dried potatoes) and other foods directly onto the growing pile.  Following our meal together, Pastor Raul announced it was time for dancing, an indoor activity that is popular during the heat of the day.  As special guests, the students found themselves invited to dance over and over again.  There were many willing and able participants … of all ages.  As the sun settled into the western sky and the temperature cooled, we said our goodbyes and headed back to the village commons for the final activity of the day:  a community soccer game — Gringos vs. Colquemarquians!