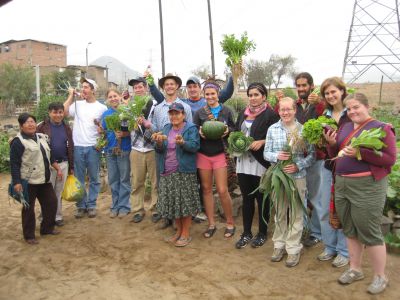 Our visit to the district of Villa Maria del Triunfo in southern Lima showed us what a pueblo jóven looks like as it grows up. The area, which was founded almost 50 years ago, is now home to approximately 360,000 people, many of whom struggle with underemployment and poverty. Our first stop was Jesus Mi Buen Pastor, a preschool with about 60 students. The SSTers got a preschool-style workout as they granted repeated requests for “airplane” rides and other high intensity playground activities.

Our hosts for the night were our friend Alicia and her family, who directed us right away to a dusty soccer field around the corner from their house. SSTers joined in the game or spectated on the sidelines. Afterwards we attended a birthday party for Alicia’s nephew, who was celebrating his third birthday.

We spent the next day in two of the district’s biohuertos, or community gardens. We first visited Niño Jesús, a garden started almost three years ago and tended by local families. Gregoria, the program’s coordinator, told us how the biohuerto project improves food security and nutrition among local children and older adults. She showed us how the gardeners developed a drip system for irrigation and talked about how their round-the-clock schedule helps protect the garden from would-be vegetable poachers. The project has had help from the local power company—it donated the land underneath electrical towers for the gardens—as well as the local community and an international NGO. The area gets just 25 mm of rain a year and has extremely sandy soil, but somehow the gardeners manage to produce beautiful lettuce, sweet potatoes, broccoli, cauliflower, eggplant, onion, squash, and tomatoes (among others!)

The second garden, Biohuerto Sacsayhuaman, was in expansion mode when we visited. We spent the morning helping to prepare a new plot for planting—which meant sifting through sandy topsoil to remove rocks and garbage. As we worked, several things became clear: no one would be picking up this garbage to take to a landfill; other trash heaps near the garden attracted a steady stream of people, who came by to see if they contained anything usable; and the need for produce from this garden was very, very acute. While the garden provides food for local families, it gave us food for thought.