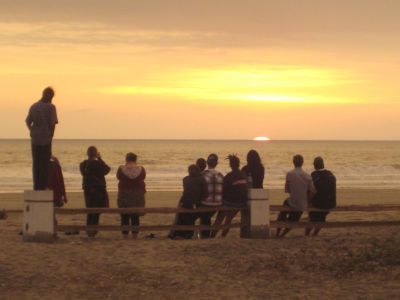 After six weeks of service the SSTers said goodbye to their host families and work in Cusco, Huaraz, San Ramon, La Merced, and Azulís and returned to Lima for the final exam. A few hours later we headed south on the Pan-American Highway to Kawai, a retreat center on the Pacific Ocean about an hour outside of Lima.

We were blessed with warm sun during our three days at the beach and enjoyed the opportunity to catch up with each another, sharing stories about new friends and host families, service work, and other adventures. We also took some time to consider the fast-approaching return to the United States—both the excitement of homecoming, and the phenomenon of reverse culture shock.

We also spent a day hearing about the SSTers final projects, which covered a wide range of issues:

We returned to Lima to spend a few last hours in the city before leaving for the airport.