My first day waking up at my SST placement began at 5 in the morning with the sound of a guitar outside my door. It was somber and I threw on a shirt for morning worship and devotions. Though I can barely make out what is being talked about with the help of Pak Yo, it is an intimate yet powerful way to start the day. It is a Sunday, an important day for most Christians around the world. My supervisor and the leader of the mission house, Ibu Fani, tells me I will be joining Pak Yo to help lead worship at a village this morning. I have since found out that every Sunday, each of the adults have their own village with their own church they are helping to foster each week.
At about 7 am we set off. I was given a helmet and was told “hati-hati” (be careful) as Pak Yo peeled off on the dirtbike with me clinging to his shoulders. The first few minutes of the ride were fast and smooth, with paved roads in the little town of Melolo. Once we got a bit farther out, the roads quickly became more interesting. Nothing but rock, dirt, mud and sometimes wooden bridges were what made our path. The bumpiness was only a fear of mine when we started going up or down the steep hills of Sumba. Pak Yo was careful and took it slow and we made it to the village in one piece. The view was breathtaking, with rolling hills and traditional houses and a river flowing through the nearby valley.
I will be honest. The church service was awkward as I didn’t really know where to sit or what to say when they asked me to introduce myself, but in the end they welcomed me. Each shook my hand before and after church and though both sides felt the language barrier we were still able to smile. After the service they asked for a photo and most of the congregation was in the picture with me. I later asked for the selfie shown. They even pointed out some specifically great spots to take pictures at. We parted ways, and as Pak Yo and I drove off on the dirt-bike, the congregation yelled “da-da” and “hati-hati”.
Though it was just a trip to church and back, I doubt I will soon forget this experience. Not just because of the adrenaline of nearly falling off of the dirt bike but from the humanity I saw. Emulating the people here would make the world quite a bit more peaceful and I intend to carry their kindness with me and pass it on as I can. I am slowly learning to lean into the awkwardness here, because without it I am not going to learn much. I expect this is only the beginning of a memorable trip. 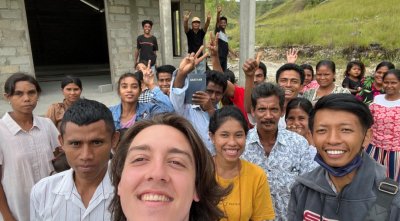 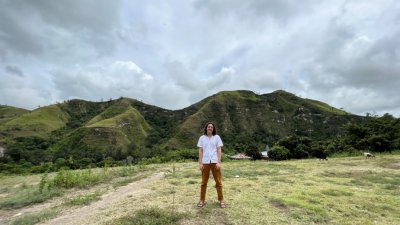