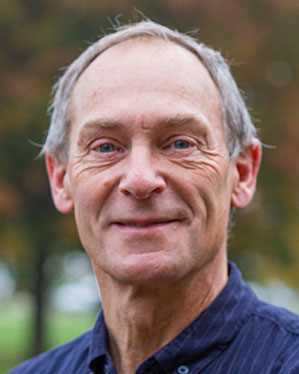 By Duane Stoltzfus, professor of communication
THIS WEEK’S THEME: Arise, shine; for your light has come

DEVOTIONAL:
Shortly after nightfall, as if someone had flipped a switch, the rain suddenly turned to sleet and the roadways to ice. I was driving to my parents’ house in New York state, a bad time to be riding on old tires. To make matters worse, I had to head deeper into the woods for the last few miles, winding alongside a creek.

The car met its match on an uphill curve. The car tires started spinning, and the car slid down to the edge of the creek. I tried to clear the crest of the hill several more times, but never made it. I managed to back down and park the car on a narrow shoulder of the road, and then set off on foot.

The road was as dark as it was icy. No one seemed to be at home in the few houses that I passed, and I had no flashlight. After 20 minutes or so of walking, I saw the faintest of lights up ahead. The light grew brighter, like a silent train approaching. Before long, I heard my name called out. It was my father: a search party of one with a flashlight. I was grateful (and still am, 25 years later).

Few biblical metaphors are as powerful as that of light, and never is that light more welcome – and needed – than at Advent. A light is dawning. A light comes to those who sit in darkness. Put on the armor of light. A city on a hill cannot be hidden.

In our homes and in our churches, the lighting of the Advent candles is a reassuring symbol of the power of the one true Light; each week the light grows stronger. Just as we gratefully receive the light, we are directed to extend Christ’s light in the world. On Sunday, we sang: “Christ be our light! Shine in our hearts. Shine through the darkness. Christ be our light! Shine in your church gathered today.”

May we take the Light to all places in darkness – even when the roads turn icy.