Following the election results from the eighth of November, the Center for Intercultural and International Education (CIIE) decided to take a step forward in supporting the members of the community who have been affected. 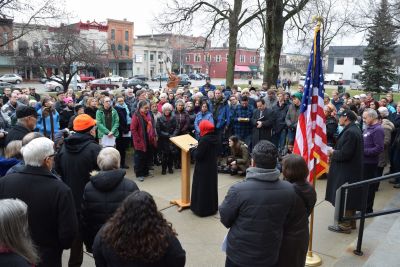 On Inauguration Day, the Intercultural Team assembled at the Elkhart County Courthouse, in downtown Goshen, along with people from the community.

To get started, the Intercultural Team began an initiative led by Richard Aguirre in his church, Berkey Avenue Mennonite, where he asked for volunteers to provide support to those in need. Different options for showing support, such as donations of food, transportation, childcare, or legal assistance, were presented to those interested in helping out. Aguirre presented a sign-up sheet to the church members where they could volunteer to show their interest in providing support through any of the possibilities mentioned.

The Intercultural Team consisting of Aguirre, Rocío Díaz, Gilberto Pérez Jr., Chris Kennel, and Luis Pérez also held a meeting for several Latino community leaders from Goshen on Monday, November 14th. Some of the participants represented were La Casa, Inc., Spanish-language radio station WKAM 1460, Goshen Community Schools, Maple City Health Care Center, and the leaders of the Latino Student Union from Goshen College. In the meeting they discussed the situations that had either begun to arise or could possibly arise given the outcome of the election.

The Intercultural Team also entered into conversation with some of the students who are part of the English as a New Language program to hear their reactions and fears about the election results. The team was also a part of a National Immigrant Justice Center meeting.

Another activity created by the Intercultural Team was the pozolada that took place on Thursday, December 1, 2016 at Java Junction, Goshen College’s student-run café. Through this event the Intercultural Team wanted to create a space for members of the community and of the university to have open discussion and communication, and to provide mutual aid for those affected by the outcome of the elections. Pozole (“hominy”) is a traditional comfort food of Mexico and consists of broth to which hominy, chicken or pork, chili peppers, and seasoning are added, then garnished with a selection of shredded cabbage, limes, sliced radishes, chopped onion, avocado, and much more. A pozolada brings people together and is a typical dish served at celebrations and gatherings.

In the following days, Goshen College’s Intercultural Team, under Richard Aguirre’s initiative, worked to launch Elkhart County HOPE (Helping Our People Everywhere). It focused on creating a network of contacts and a means for fundraising, something that would be possible through work in churches, businesses, educational institutions, and different organizations. Those organizations looked to help the immigrants affected by the actions of Donald Trump and those who are vulnerable in case of an emergency. This association would try to help through connecting resources for transportation, food, legal expenses, college expenses, and childcare to people who need it.

On January 5, 2017, EC HOPE held a meeting at the Goshen Public Library, where more than one hundred people showed up, already asking for help or looking to collaborate with the cause. Since then, almost 300 people are now involved in Elkhart County HOPE, and in the next few days it is possible they will start to act depending on the actions taken by President Trump’s cabinet.

On Inauguration Day (January 20th), the Intercultural Team assembled at the Elkhart County Courthouse, in downtown Goshen, along with people from the community. This event gave various people an opportunity to speak out in light of the president’s words and actions affecting them due to the color of their skin, race, religion, or ethnicity. The speeches were supplemented with songs and prayers, uniting those in attendance united by showing their support to those affected. Different television and newspaper outlets attended this event with the intention of publicizing the movements taking place in the city of Goshen.

Right away, on February 4th, EC HOPE created an event for the Latino population called “Know Your Rights,” with the goal that all of the Latinos in the community would know what to do in case they were stopped by the police.

Today, EC HOPE states that they have created a good path for the future with the union of more than 325 people in the project. This brings stability, which unites the associations created with some companies of Goshen, and is trying to display support for the Latinos of the community.

With an agreement of collaboration, EC HOPE agreed to join with Center for Healing & Hope. The agreement was announced during the event “Fiesta Feast,” which took place on April 22. From now on, EC HOPE will count on the support of the employees of the health center. They already have many projects in mind that will eventually come into being.

As their main project, they will be working on the creation of ID cards for the residents of Goshen, similar to the ones used in South Bend. These cards would greatly help the residents that are experiencing difficulty in obtaining identification documents. This form of identification would be valid before the authorities of Goshen city, such as other ones in places like Oakland, California., Detroit, or South Bend. This document would also be used for getting medicines, making bank transactions, or to demonstrate residence in necessary cases.

The first steps have already been taken, and now the objective is to find the sufficient funds and form a committee to determine the roles and responsibilities in the process. In addition, they are negotiating with La Casa de Amistad, the same company that created the documentation in South Bend, so that they can do the same thing in Goshen. 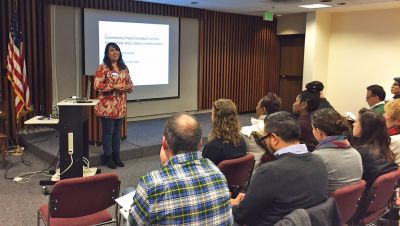 On January 5, 2017, EC HOPE held a meeting at the Goshen Public Library, where more than one hundred people showed up.

But the creation of this document is not the only thing that EC HOPE is working on right now. They are also working on the option for a meeting between the sheriff and the police chief and the community to have better communication between the two sides. In addition, the network is trying to create a directory to support Latino-owned businesses.

Finally, with the money gathered over many events, EC HOPE has donated part of the money to families that need it, and they are also looking to finance legal help for all immigrants in need.

The Intercultural Team is now working endlessly to help the students who feel vulnerable, trying to create a space for peace, respect, and love on campus, and they appreciate the help of many students who are demonstrating leadership with different events.