We woke up this morning to the sounds of pouring rain and raucous thunder. I was desperately hoping for one last day to soak in the sun, but maybe this makes it easier to say goodbye. After three weeks in Weslaco, Texas, I can hardly believe it’s time to go. It’s weird to think that the girl you sat next to awkwardly on the plane ride down, who felt like a total stranger, is now featured in so many memories and someone you can’t imagine not knowing. Three weeks isn’t a particularly long time, especially compared to the other SST courses, but in a controlled environment, with everyone living together and no chance to really make extended connections outside of the group, it’s so easy to build relationships. Maybe the Netflix reality show Love is Blind got something right. Maybe it is possible to really know someone in just three weeks.

The past week, our class conducted interviews with local figures to build a better understanding of immigration policy and practices. We were in small groups, and today, each group shared a synopsis of insights from their interviewee. The first group to present interviewed Maria Cordero, a policy and advocacy strategist for the American Civil Liberties Union (ACLU). Cordero herself was an immigrant from Durango, Mexico, and came to the United States in the 1990s with 2 small children, escaping an abusive relationship and trying to build a better life for herself and her family. Cordero currently lives in Brownsville, TX and was first recognized for her work with women in situations of domestic violence. The group interviewing her was extremely impressed by the work the ACLU does, especially around educating immigrants about their legal rights, and touched by Cordero’s personal story. Their whole interview was conducted in Spanish, and they deserve respect for the extra work they put in translating questions and answers. 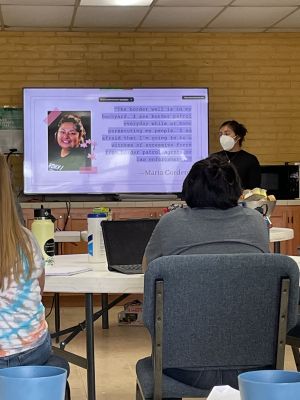 The next group interviewed Magda Boland, Executive Director at La Posada, where we’ve been building the fence the past two weeks. Their interview was also conducted entirely in Spanish. The group gave us more insight on the history of La Posada and the specific work they do, and noted Magda’s grace and work ethic. They actually recorded the entire interview and it will air on 104.3 Radio Horizonte,  a radio station in Goshen. If you’re curious and would like to hear more about Magda and La Posada, you can listen to it here. 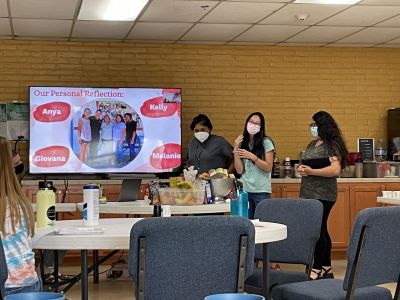 My group interviewed Sheriff Urbino “Benny” Martinez of Brooks County, the county directly north of Hidalgo County, where Weslaco is located. I could probably write an entire essay analyzing our conversation with him, but to give a quick summary, Sheriff Benny was rational, level-headed, and extremely concerned with treating people with humanity. Qualities I hope everyone in a leadership position possesses, but are not as commonly found. Brooks County has the highest number of migrant deaths in the state of Texas, because the rural terrain makes it extremely difficult for emergency services to reach migrants. In 2021 alone, Sheriff Benny told us they found 119 bodies in the brush, and that for every body found, there are probably another 5 that are not. The sheriff is very concerned with identifying dead bodies and working with the consulates of their home countries to contact their families and give them closure. He kept coming back to the idea of helping the victim and exerting compassion. I genuinely liked Benny as a person, and was eager to share our new (albeit sobering) knowledge with the group. Another group interviewed a man named Eddie Canales, who also operates out of Brooks County. Eddie started the South Texas Human Rights Center with his own retirement money and works closely with law enforcement to recover and identify migrant bodies. He also had partnered with many ranch owners to set up water stations on their properties for the travelers. The group emphasized how expensive it is to identify dead bodies, and to be honest, it’s sad that we have to spend so much money identifying a dead person when it could cost us less to help keep them alive in the first place. The last group to present talked with Azalea Aleman-Bendiks, a retired public defender and Harvard Law School graduate who came to speak to us a couple weeks ago. Because Azalea had already shared so much with us during her previous lecture, the group interviewing her focused on asking what policies she would like to see and what we as individuals can do to affect change. 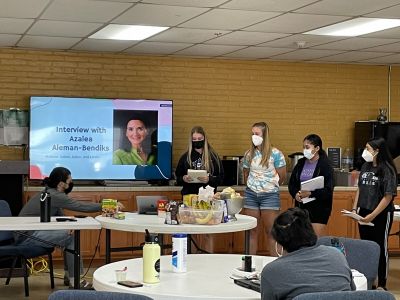 While reading and hearing about these intense issues, I often find myself feeling frustrated and insignificant. The problems surrounding immigration and the human rights violations at the border feel larger than me, and seem only alleviated by policy changes, something out of my control. It’s hard, then, to process all of my negative feelings of anger without getting swept into a mindset of “well, it’s bigger than me so I’m just going to avoid thinking about it.” There are things we can do to help, though, and hearing from the groups today really clarified that. I want to share three tangible ways to work for change regarding the immigration crisis.

I’ve been so proud of how our group has grown and connected on this trip. We have all had struggles and emotional moments, particularly after a couple guest speakers. But we realized while processing today how much stories mean to us. Meeting a person and hearing their story or seeing stories played out in a video do so much for building our own empathy and passion. We talked about how our interviewees weren’t trying to seek status or power; they are driven out of a genuine care and compassion for human life. I think we all came away from our interviews feeling simultaneously inspired and frustrated with the current immigration policies being carried out.

In the weeks leading up to this trip, I was feeling a bit of dread; I didn’t really know anybody in the class, and I thought about all of the fun my friends back on campus would be having while I suffered from physical labor in the Texas heat with no close companions. Looking back, though, I am so grateful I signed up. I have met some wonderful people and made amazing new friends. I have also pushed myself out of my comfort zone and expanded my perspectives. Even though this class was about serving with MDS, so much more of my experience came from listening and learning from the people we were serving and other groups in the area. Even though we were only here for three weeks, part of me will feel connected to the Rio Grande Valley for years to come. It’s cliche, but there is nothing else I would have rather done this May Term. 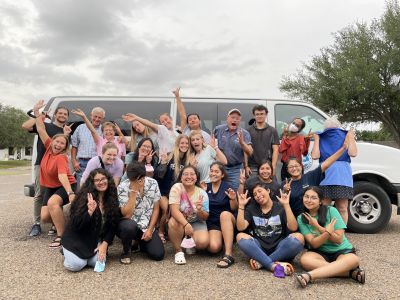