Making camp in the Boundary Waters requires more than setting up tents and starting a fire.  Once a campsite is picked and everyone clears out of the canoes, each of us takes a job and help make camp.  Here are some of the basics of making camp.

Picking an ideal campsite is important.  With nine people, we needed to make sure that there were enough soft, level spots to accommodate four tents.  Every campsite has advantages and disadvantages, taking into consideration anything from entry points to fire grates, from tree cover to latrine location.

Once a campsite is chosen, each of us would begin by setting up our tents.  We were fortunate to have brand new tents from Wilderness Wind for our trip, which are designed to be set up and ready to go in minutes.  With an assembled tent, we threw our sleeping pads and sleeping bags inside and moved on to other tasks. 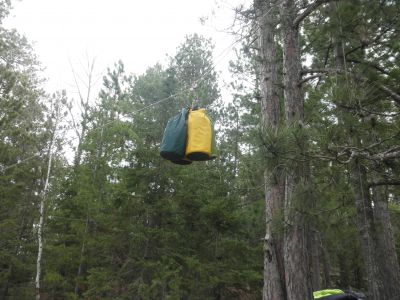 Three of our food bags suspended in the air. The US Forest Service recommends hanging the food at least 12 feet off the ground.

Bear ropes are used to keep bears from stealing the camp’s food.  The majority of the time, bears don’t want to encounter people—only their dinner.  Using a rock, we would throw the bear rope over a tall branch and tie it off.  Using a pulley-system, we were able to suspend our eight food packs high into the air.

As an extra element of protection from the elements, a rain fly was set up for us to throw our packs underneath in case it rained.  The idea was to pick an unexposed spot within the trees that would ensure that anything under the tarp would be kept dry.

While those two items were getting assembled, other group members were collecting firewood, unpacking the community bag and assembling camp stoves, and still others are hanging clothing that might be wet from canoeing.

The other factor that can make or break a campsite can be its view.  Some of the best campsites have spectacular views overlooking the entire lake.  And for camps on the East side of a lake, the sunsets are phenomenal. 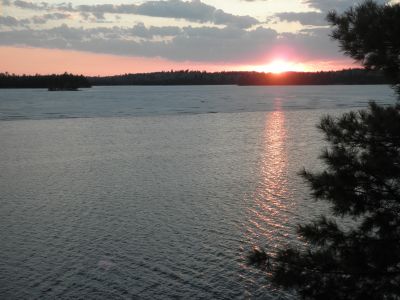 The sunset from our second night on East Loon Bay

When our group woke up in the morning of our second day, we were greeted again by the sheet of ice blocking the water between our campsite and Lac La Croix.  Since we intended to schedule a “layover day” into our trip to relax and regain energy, we decided instead to use it as a day to relax, have a pancake breakfast and wait for the ice to melt.

As Val flipped and distributed flapjacks to the students, a faint and distant howling could be heard across the lake.  Almost a half a mile away, a white wolf scampered across the ice, while our group watched in reverent silence.

Seeing a wolf is very rare in the Boundary Waters, and we discovered later that we might be the only group from Wilderness Wind to have seen a wolf on our trip.

Prof. Val Hershberger Fillets the first catch of the day on a canoe paddle.

After the wolf retreated back into the trees, each of us made our own entertainment for the day while we waited and watched the ice melt.  The day became very warm and pleasant, and as the sun set and the evening cooled down, three of us caught Northern Pikes, which Val filleted and served with an assortment of spices.

Spending an extra day in a campsite can lend itself well to experiencing wildlife.  Apart from the wolf, loons were a regular occurrence, as well as mink, river otters, and beavers towing branches across the water (not to mention the very diverse bird population).

Even though our layover day wasn’t used for the most ideal reasons, our group was able to relax and adjust to the nature we immersed ourselves in.  We had a day to become adjusted to the Boundary Waters, and to witness some of what the Waters had to offer us in the coming week.