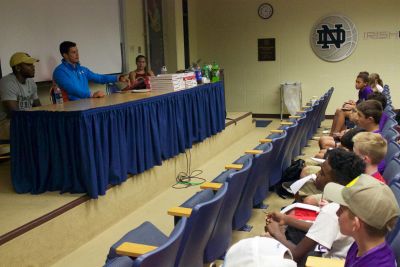 When asked about prospects for the upcoming year, Zaire said, “We’re hoping to have the season that we’ve been waiting for. We want to win a national championship.” Zaire responded to another question about his status as a starter by saying, “What’s most important is that I contribute to the team in any way that I can.”

Tranquill shared his pregame routine: “We say a prayer, which puts our minds and hearts in the right place. Then I take a cold shower. I listen to some of my favorite music, then have my ankles taped. Ten minutes before the game, I put on my shoulder pads and helmet.” 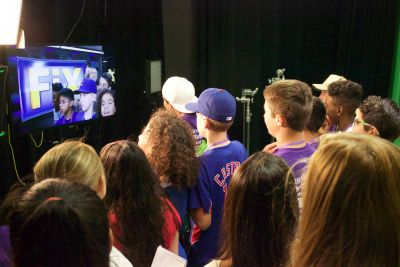 Jack Nolan on the screen in the Notre Dame studio.

The students then met with Jack Nolan, a longtime sports and news anchor with WNDU-TV who coordinates day-to-day TV and radio operations for Fighting Irish Media.

“When you have to get up in front of a group of people and speak, whether a few people or 20 or 40, within a minute people will judge you by how you sound and how you put words together,” he said. “The basis to speaking well is writing well.”

Dan Colleran, the associate director of athletics communications for Fighting Irish Media at Notre Dame, with a personal focus on ice hockey and golf, coordinated the Write on Sports visit to the University of Notre Dame. Colleran and Michael Bertsch, who directs football media relations, led the campers on a tour of the stadium. 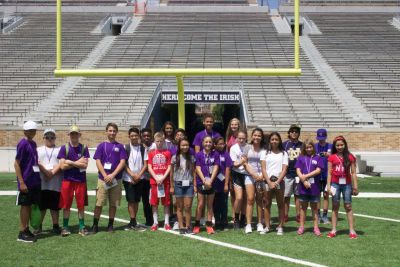 The students entered the locker room and then took the same route that the players take to walk to the field, passing  the “Play Like A Champion Today” sign in the stairwell that leads to the tunnel that empties onto the field. In keeping with tradition, the campers hit the sign on their way out, each in their own style.

Before leaving, Bertsch had the students follow him to a spot on the field near the Notre Dame sideline and the 20 yard line, the only place inside the stadium to glimpse the “Touchdown Jesus” mural that faces the university’s football stadium. “Hopefully this is giving us good luck from our sidelines,” Bertsch said. The next test will be Sept. 10, when the Nevada Wolf Pack arrive at the stadium.

In the media room at the stadium, Bertsch told the students that 75 to 100 journalists typically arrive after the game to interview the coach and players.

“Hopefully, 15 to 20 years from now,” he said, “you guys will be here raising your hands and asking questions.”