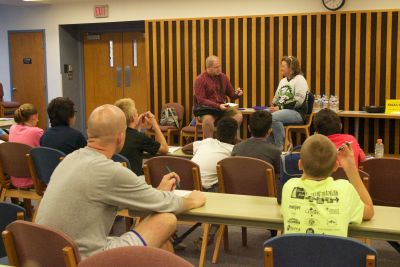 Stephen Brooks, sports editor of The Goshen News, asked Michelle Marquis, a lifelong competitive racer from Goshen, a straightforward question: “When did you get started with BMX racing?”

Marquis said that five years ago she happened across a BMX shop in Florida. She looked over the bikes, including a bike marked for clearance, and left. Later in the day she was at home, thinking,”I really should go back to the store and get that bike.” The bike wouldn’t leave her alone. So she made a return trip to the store and entered what she called “the BMX community.”

Brooks hit the pause button and turned to the 25 middle-school campers from Goshen Write on Sports to share his thoughts at this point in the interview: “I could write, ‘Michelle Marquis races bikes.’ Would you want to read that story? I don’t think so. I want a hook, something to draw you into the story.”

The return trip to the bike shop provided one such “little story to get into the main story.”

Marquis, who became the first certified BMX coach in the U.S., said BMX racing is a “a sport for all ages, from 2 years old to 70 years old.”  She said that entire families take up racing.

In 2013, one year after her debut in BMX racing, Marquis finished the season ranked 11th in the nation in her class. 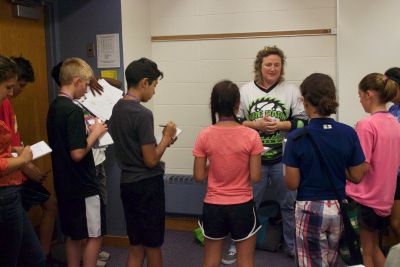 What’s it like to be a BMX racer? “It’s a place where I find freedom,” Marquis said. “I forget everything else from my day; I forget work that still needs to be done. Wearing a helmet is my happy place. It doesn’t matter if it’s a bike helmet or a race car helmet. When the helmet goes on, the rest of the world goes away.”

“Racing is in my blood,” she said. Marquis said that her father took her to an Indy 500 race when she was in seventh grade and she “fell in love with racing.”

BMX racing provided a way for Marquis to reclaim her racing identity. Years earlier she helped create and became program director of the Lyn St. James Driver Development Program. For 18 years the program focused on physical fitness, mental preparation and the business aspects of Motorsports for female drivers.

“BMX is still a grass-roots sport,” she said. “You get a bike, pack your gear, go the track, and every once in a while check to make sure your tires are inflated.”