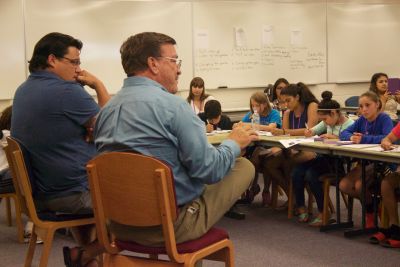 Jason Samuel, left, and Vince Turner at a mock news conference with Write on Sports. Photos by Katie Hurst

They were both sportscasters of the year in the state of Indiana. They both earned a living by announcing games. They both are comfortable in front of a microphone, talking about sports or most any other subject. They also know when it’s time to be quiet.

The former sportscasters, Vince Turner, who is a vice president and regional manager of MutualBank in Goshen, and Jason Samuel, an assistant professor of communication at Goshen College and general manager of 91.1 the Globe, made a joint appearance at the Goshen Write on Sports camp on July 13.

In response to a camper’s question about a memorable moment in sports, Samuel said he will always remember a game in the Elkhart North Side Gym 14 years ago when Shanna Zolman of Wawasee High needed 50 points to break the state’s girls basketball scoring record. She scored exactly 50 points that night in front of a crowd of nearly 5,000 people.

“When she made the basket that broke the record, do you know what I did?” Samuel said. “I didn’t say a word. I didn’t need to. The crowd was speaking. It was an awesome moment.”

From 1998 to 2002, Zolman scored 3,085 points. She held the scoring record until January when Jackie Young of Princeton took the honor in a game against Wood Memorial.

Turner said that brought to mind a semifinal game in the 1980 Olympics when the U.S. hockey team defeated the powerhouse Russians. Turner said that Al Michaels did a masterful job in calling the game: “He said, ‘Do you believe in miracles? Yes!’ And then he let the crowd noise and visuals speak. Sometimes the less said, the better.”

Turner described himself as “a natural ham” when he is on the air. But he told the 25 campers from Write on Sports that they can be effective broadcasters even if they are not naturally talkative in public. 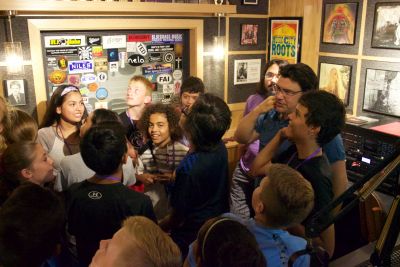 Goshen Write on Sports campers squeeze into a studio at 91.1 the Globe.

“Some of the best announcers are the shyest, most introverted people you have ever met,” he said. “But behind the mic, they are all in.”

Samuel held up a black notebook in which he still has notes and phone numbers from his early days in broadcasting. Before calling a game, he said, he always researched the players; and during the game, he always kept his own scorecard. “Preparation gives you confidence,” he said.

Another tip: be ready. “The best ability is availability,” Samuel said. “Sometimes somebody goes down. When that person goes down, you have to be ready. You will get your chance.”

Turner, who was inducted into the Elkhart County Sports Hall of Fame, was sports director for WTRC from 1985 to 1998. Earlier, from 1977 to 1985, he served as a sportswriter with The Elkhart Truth. Under Samuel’s leadership, 91.1 the Globe has been named the best collegiate radio station in the country several times. After the interviews, Samuel led students on a tour of the radio station.