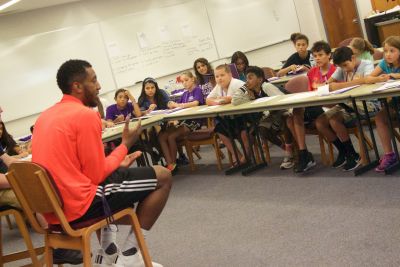 The official interview with Jerron Jamerson, a professional basketball player, had ended. Jamerson and several campers were standing by the door of the classroom, poised to go outside. One of the campers thought of one last question. “Do you think you’ll try to get into the NBA?”

It’s a question that almost got away and that may have been the most telling of all.

“I’m going to Australia to play in August, and then back to Canada for the winter season,” said Jamerson, who is 24 years old and stands 6’4″. “After that I hope to play in the NBA summer league.”

Jamerson, a Goshen College graduate and former Maple Leaf basketball player, signed his first professional basketball contract in January with the Moncton Miracles, a charter member of the National Basketball League of Canada. Two months ago he also signed to play ball in Australia during another part of the year. 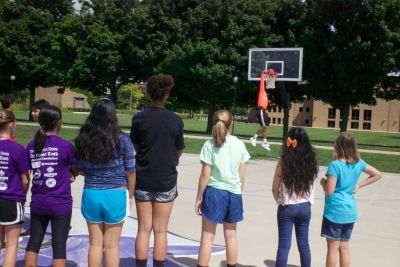 Jamerson, alone at the rim.

“I’ve always wanted to travel, and I love basketball,” Jamerson said.  “I feel fortunate that I can explore different countries in this way.”

Jamerson said he was gratified to graduate from Goshen College in 2014. “That was not only for me, but also for my parents,” he said.

Jamerson, who is from South Bend, said that one reason he chose to attend Goshen was so that his family could attend home games.

Tony Miller, the sports information director at Goshen College, opened the interview session with Jamerson, and then campers had their chance to offer questions. After the interview, Jamerson demonstrated his dunk form at an outdoor court on campus and also played several students one-on-one.

Jamerson began his collegiate career at Owens Community College where he spent his freshman and sophomore years. Throughout his time at Owens, he received All OCCAC Honorable Mention and Most Improved Player awards before transferring to Goshen. 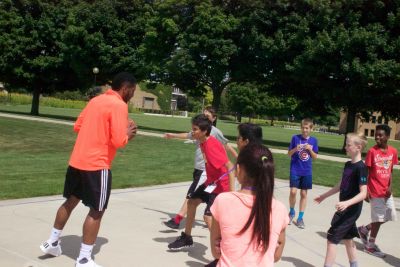 Jamerson goes one on seven.

One question gave Jamerson pause. “Who was your favorite player in college?” He started to answer, hesitated, and then started over: “I don’t want to put anyone on the line. All my teammates were my favorite player.”