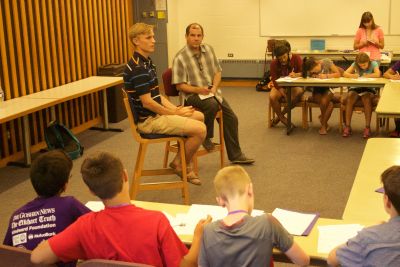 Tony Janzen, left, and Anthony Anderson at the Goshen Write on Sports camp on July 12. Photo by Katie Hurst

Tony Janzen, a former standout on the Goshen College soccer team who was twice named an All-American, was on a service assignment with his wife when an invitation came to play in the first division of the professional league in Cambodia.

Janzen had been playing in an amateur league when his team went up against Cambodian Mine Action Centre, or C-MAC, a team that was looking to compete in the top division. Janzen scored in that game and was invited to play for C-MAC. Soon he was sharing the field with the top soccer players in the country.

“We played twice a week,” he said. “That may not seem like a lot to you, but to me, as a 30 year old, that was a lot of pounding on the body. I was always trying to recover, especially when we had a game on Thursday and another one on Saturday.”

Janzen  talked about his experiences playing soccer in Cambodia during an interview on Tuesday with Anthony Anderson, the assistant sports editor at The Elkhart Truth. Janzen and Anderson were the first guests at the 2016 Goshen Write on Sports camp, which began on Monday. A record number of students, 26, are signed up for the camp this summer.

Anderson began by telling students that he likes to open an interview with “nuts and bolts.” With his tape recorder running, he asked Janzen when he was born (Nov. 14, 1985). Then he asked when he graduated from high school (Elkhart Central, 2004).

Soon, Anderson moved on to other questions, often pausing to tell students what he was thinking as a journalist. The students learned that Janzen’s Cambodian team finished the season in ninth place (out of 12 teams), good enough to stay in division one. The two lowest-ranked teams are moved out of the top division at the end of the season.

Janzen was juggling his soccer playing with commitments to Mennonite Central Committee, a service and development agency. He and his wife, Denise Reesor, were MCC representatives based in Phnom Penh as coordinators of exchange programs for young adults. His contract with MCC ruled out a soccer salary.

“I told them  you don’t have to pay me,” Janzen said. “They also knew I couldn’t make every practice since I had a full-time job.  I only missed three of 22 games and scored some goals during the season. They paid for my soccer cleats, which was a nice bonus.”