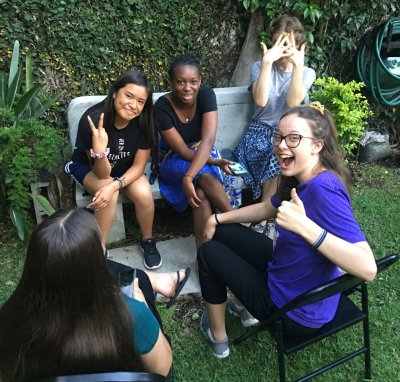 As per usual, the last two days were full of activities. After our morning sessions Monday on “Youth and the Fullness of Humanity” (already discussed in the previous blog), we took a field trip to UPAVIM (United Para Vida Mejor/United for a Better Life), a women’s cooperative on the outskirts of Guatemala City. The impressive cooperative runs a daycare, a bakery, a pharmacy, a medical clinic, and a handicrafts workshop, all under one roof. Ten Thousand Villages shops in the U.S. and Found in Goshen carry work from UPAVIM. Students loved consuming fresh, hot pan de agua and banana bread, and purchasing items from the little shop at UPAVIM.

Last evening we engaged in a vigorous theological/social discussion. We first identified a number of topics we wanted to discuss, then voted on them, and then entered into the first of a couple of nights of discussion we will have while we are still here in Guatemala.

In other news from yesterday, Gabe fell through the ceiling of what was Gwen’s dormitory room, crashing onto a bed (fortunately). Gabe was fine other than a bit of a bruised ego: the bed and ceiling, not so much. It was an innocent mistake. After an overthrow of a hackysack by John, Gabe climbed a ladder onto the ceiling of the room to retrieve the ball (which had been purchased at UPAVIM earlier in the day). The drywall ceiling caved in, dropping Gabe into the room. We were grateful for the construction workers who came today to put the room back into shape and to paint the area.

This morning we rose and had breakfast just a bit earlier, and then headed off to Margarita Tejada School, which is for students with Down Syndrome. We began with a video about the foundation that runs the school, and then had opportunities to work with the Margarita Tejada students doing art projects, stringing beads, cleaning windows, baking sweet bread, doing taekwando and working in the kitchen.

Sarai wrote in her journal yesterday (used with permission): “I really like our field trips after our sessions because what they teach us in class has to do something with our trips and we get to see it in person, and get to hear from people that work there. Talking about Jesus and vocation has affected my ability in a good way to engage with the various people we are meeting and organizations we are observing. I see how God works in those organizations like UPAVIM.”

This afternoon was our final “Youth and the Fullness of Humanity” session, which included input by Mario and Andrea about love as well as a presentation by Mennonite Central Committee country director Jack Lesniewski, who oversees MCC work in Guatemala and El Salvador. MCC is a service and development agency of multiple Mennonite and Brethren in Christ denominations, with workers in 58 countries around the globe, doing relief, peace and development in the name of Christ. Jack used the “swords into plowshares” passage from Micah 4:1-4 to frame his comments. Jack talked about the nature of sin as structural and social as well as personal, about the importance of accompanying or walking alongside those who are suffering, weakened or otherwise in need, and about advocating for Guatemala once we return to the states. Two issues he suggested we advocate on with our members of Congress: the problem with militarization along the Guatemalan/Mexican border in an effort to keep refugees and asylum seekers from crossing the border; and not having Guatemala be the refugee homeland for Central American people seeking asylum, since the country is not equipped with finances or resources to handle an influx of refugees. The MCC country director said, “No one person is responsible for the structural and institutional racism, classism and patriarchy we see in many countries, but no one person is free from responsibility for undoing these things.”

Seth’s poem yesterday, which was a response to our discussion about racism from the previous day, was this (used with permission):

“Do we not deserve to live without shame?
Are we not all united in Christ’s holy name?
Are there borders among us that can truly stand?
Are we not all blessed by God’s holy hand?”

Zana wrote yesterday in her journal (used with permission): “The topic that we had class on today — power, privilege and service — I found to be very interesting. I especially found the section on vocation and passions to be a nice thing to think about. I have thought about my passions a good amount recently but it felt good to actually put it down in words and fully process it. I also thought that the questions that we discussed in our small groups about race and identity were really interesting to talk about. Our group talked a lot about how being minorities, Black, Latino, Asian, Native American, were not seen to be preferable and many times were discriminated against, especially in the United States. This is pretty similar to here in Guatemala: being Spanish or Ladino was preferable to being indigenous. Neither indigenous people or other different minorities had many actual rights in history and all seem to still be discriminated against today. This is something that I’m interested in working in — reconciliation and trying to move to peaceful times between everyone.”

Mario opened up today’s session on Love by talking about two Guatemalan artists whose artistic work has inspired many others. Andrea talked about the love chapter, I Corinthians 13:1-13, and led students in a discussion of authentic love. The group also played a Zombie game for a few minutes, and then finished with a circle process where they identified learnings from the input and discussions that have been foundational during our time in Guatemala. It’s clear students have been inspired in many ways during the week and a half we’ve had thus far in Guatemala.

Johanna wrote in her journal yesterday (used with permission): “The three questions Andrea asked us to journal about in our session really helped with thinking about what this meant for us. I don’t know if it was like this for everyone, but at least for me all of my answers connected, which got me thinking. It made me think about how I think there should be more love and positivity in the world and more people going out of their way to help others. Thinking about this made me think about how I love helping others, and how that is something I want to do with my life.”

Alex wrote in his journal today (used with permission): “In the Bible it says to love your neighbor, which is a huge motivator for me. If I’m unable to love my neighbor and those different from me, how can I possibly be a Christian? As I continue to pursue the life of Jesus, I tend to see hate in some people, while I try to pursue a sense of peace and equality. That’s what I believe Jesus wanted. Peace …. Learning about Jesus and theology makes connecting with people and engaging with them a unique experience. It’s one I hope that I never forget. To talk about Jesus and vocation during the context of this period is interesting …. It was hope that kept people going. Jesus inspired hope into others through his actions and through his words. Now, especially, is a time when hope is needed. The vocation part of this trip has made me want to inspire hope into those that I meet. Although I am no Jesus, I believe that each of us can inspire hope as he did. It just takes a bit of engagement and commitment.”