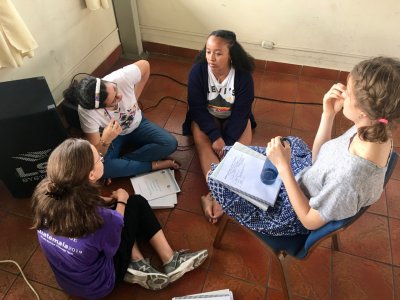 Yesterday was filled with stimulation, with Sunday’s visit to the downtown polling plaza where Guatemala’s elections were occurring, a spontaneous 20-minute visit to Catholic worship when we realized we had a window of time, and then a lecture about politics from sociologist and professor Jeremias Ochoa. Since Guatemala’s national and municipal elections were being held, we didn’t travel out into the countryside over the weekend, but we enjoyed the short trip downtown to a polling station (no photos allowed there). Most district council and mayoral positions were decided yesterday, but with multiple parties in the running, the president and vice president’s positions were not yet determined. The winner has to secure 50 percent of the vote, so there will be a run-off election between the top two vote-getters in mid-August.

Professor Ochoa spoke about Guatemala’s history, including the devastating civil war between 1960 and 1996 — the war that began after the U.S. engineered a 1954 coup to protect U.S interests, including top administration officials’ financial interests — and ousted the democratically elected president of Guatemala. That coup and the subsequent civil war, with U.S. involvement in training government soldiers to torture and massacre many indigenous and other Guatemalan people (we did so through the School of the Americas and financial assistance), severely damaged Guatemala’s political and social realities, even today. Professor Ochoa also noted some parallels between Guatemalan politics and some current U.S. political realities — the normalization of outrageous behavior from top officials, divisions between the wealthy and the poor, corruption at the highest levels of government, and interference in elections from other nations.

In some of these issues, some churches have had a positive influence in Guatemala, as we have seen through our visits to non-profit organizations and heard from our speakers about gang violence and other social issues. Professor Ochoa asked, “What is the church doing in these situations? There can’t be peace without justice. And as Jesus said, ‘Blessed are the peacemakers.'”

Seth, who finishes his journals with a poem nearly every day, wrote this yesterday (used with permission):

So much darkness in our lives,
It’s easy to give up our hope
But for justice we must strive
So that we may hope to thrive.

Emma wrote in her journal (used with permission) Saturday, “I have seen God in many places in Guatemala. A pretty flower, a joyous laugh, a tender moment between mother and child, a striking cloud formation, all of these things to me are a sign of God’s presence.”

We finished last evening with worship about being salt and light in the world, led by John, Alex, Zana and Camila. The service included writing about where and how we can be salt and light, with us moving to different candlelit stations in the worship space.

Joel and Brook are meeting with each student for a routine check-in, just to gather information about group dynamics and the SSTT experience, and to provide support. They’ve been leading in the Centering Prayer each morning since Gwen’s departure for the U.S. on Saturday morning. Gwen returned to the states for Doctor of Ministry classes, and she’ll rejoin us for reorientation in Goshen next weekend. Students also write Daily Journals as well as Pilgrimage Journals, and Keith reads and comments on these daily, and is grateful for this insight into SSTTers’ experience.

This morning we also had another “Youth and the Fullness of Humanity” session, this time on Power, Privilege and Service. Mario talked about discrimination against indigenous people in Guatemala, and had us reflect on discrimination and racism in a U.S. context.  At one point, Dion said, “I used to be envious of white people’s comfort and power, but in recent years I’ve seen African-Americans as overcomers. I feel great pride in my heritage.”

Andrea and Mario led us in mini-discussions of our vocational calling and our gifts, too, with some one-on-one conversations and some small-group discussions. Students also wrote comments about what they hope to accomplish or strive for over the next five years, and taped those to a piece of paper in the form of a body.

Students are learning and growing through the daily sessions which help them think about peace, justice and love in the body of Christ and in the world, and in the visits we are making beyond the CASAS campus. Alex wrote in a recent journal (used with permission): “My own personal journey here in Guatemala has been interesting. Not only have I started to have some slight revelations of how I see the world, but I’ve also felt a development spiritually. Being present in a developing country can be an inspiring experience. It’s helped me understand the impact of our actions. How we’ve poisoned our planet and turned our backs on the poor and desperate … This is making a decisive impact on my development as a person. I’ve started to wonder why ignorance is such a controlling part of our lives. It’s so important in my eyes that I discover this for myself. I think it says that I’m becoming a more self-aware person. I just hope I can help others see this.”

This afternoon we will be visiting a women’s cooperative, and we’ll report on that more tomorrow. We’ve also been joined by three representatives from Eyedart, a media production company based in Goshen. Eyedart will be following us throughout the week’s activities, taking photos and videos for SEMILLA and CASAS, and assisting with the development of the organization’s website. Thanks to you, too, for joining us on the journey.