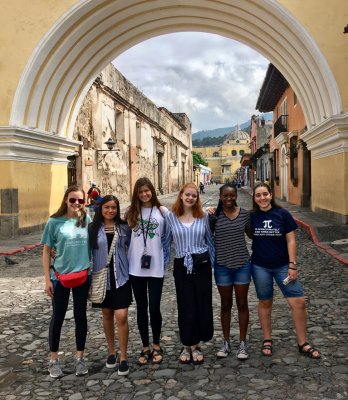 We just returned this afternoon from an overnight trip to nearby Antigua, a colonial city just outside of Guatemala city and the original capital of Guatemala. Antigua, originally known as Santiago de los Caballeros, is listed as a UNESCO World Heritage site and is known for its Spanish-Baroque-inspired architecture and the ruins of many churches. Beginning in 1543, the city was the seat of the kingdom of Guatemala, which then included current-day Guatemala as well as Belize, El Salvador, Nicaragua, Honduras, Costa Rica, and what is now the state of Chiapas, Mexico.

Frequently hit by earthquakes, the city was radically damaged by the San Casimiro earthquake in 1751 and the Santa Marta earthquakes of 1773, so the capital was moved to what is now Guatemala City in 1776.

Highlights of our day in Antigua included visiting the large cross on a hill overlooking the city (Cerro de la Cruz), where we took many photos of individuals and smaller groups of students as well as a group photo; and visiting the Convento de las Capuchinas, which was built in 1736 but then abandoned after the major earthquakes. Young women who entered the convent as novitiates were never allowed to leave; families sometimes came to leave gifts or clothing, but they had to do so through a “lazy Susan”-style door that disallowed them from seeing the young women.

While there, we were able to see the arched-doorway cells where the nuns slept, and we sang some of the songs we’ve been learning (“Rain Down,” “Fluye,” and “Praise God from Whom”) in the acoustically astounding rounded basement area. The songs resonated incredibly, and some lingered a bit to sing solos in the basement cell.

Following our whole-group tours, we divided into smaller groups and went out into the city, with the assignment for each student to visit at least one church and one other historical site or museum. At dinner time, we rotated the groups again. When we returned to our hostel in the evening, we were treated to live music by a local musician, with Joel joining in at times with drumming and students and Brook and Joel dancing salsa.

We had a free morning in Antigua this morning, and then headed back to CASAS, our home base. As I write this, we are learning how to dance salsa and merengue with a dance instructor, learning alongside a group of Latin American Anabaptists who also are meeting at the seminary this week. More photos on that later today or tomorrow.