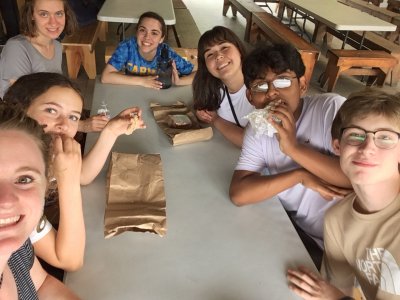 Today we headed out early for a morning of volunteering, at the request of Camino Seguro (Safe Passage), an organization that serves children whose parents work in the city landfill that we visited yesterday. The non-profit organization was founded in 1999 by Hanley Henning, who sold her personal belongings back in the U.S. that year and used the $5,000 from that sale to rent Camino Seguro’s first building.

Henning was tragically killed in an auto-bus accident in 2007, but her organization has continued and grown to a $1.6 million annual operation serving between 300 and 500 children each year, plus their parents, with education up to the 7th grade, vocational training and mentoring, and seminars and support for parents. At the landfill, 1 in 3 residents has never attended school, the average parent has a fourth-grade education, and the average family of six lives on less than $4 per day.

Our tasks for the morning were to sort through hundreds of new, donated shoes and package them into bags for a family party next week, then to add metal bowls to each bag; to put together children’s drawings and letters thanking their individual sponsors with English translations; and to assist with preparing snacks and food for several breaks. The children in the school receive breakfast and lunch plus two snacks during the day.

This afternoon we continued our “Youth and the Fullness of Humanity” sessions with Andrea and Mario, focusing on Peace. Since we addressed Justice yesterday, Andrea reminded us that there can be no peace without justice. She talked about different forms of peace, and students broke into smaller groups to talk about where they had seen peace and been peacemakers in their home communities. Students also made acrostics using the word Peace. Mario talked about the Latin American martyr Oscar Romero, who was archbishop in El Salvador from 1977 to 1980 before he was assassinated by government forces; and Monsignor Juan Jose Gerardi Conedera, a Roman Catholic bishop and human rights defender who worked in Guatemala for the rights of indigenous people. Monsignor Gerardi was beaten to death in his garage in 1998 two days after his report on victims of the Guatemalan civil war was released. Both Romero and Gerardi were nonviolent defenders of their people, standing up against oppressive governments.

We had our centering prayer this evening just before dinner, and now we are watching the film “Romero” together in our upstairs meeting room. Here is the trailer for the film if you’ve never seen this remarkable, dramatic portrayal of the archbishop’s life.

In the morning we leave for an overnight trip to nearby Antigua, an early capital of Guatemala and a town many foreigners visit when in Guatemala. We’ll be staying at El Hostal in the center of the city, but we will have only minimal wifi, so we’ll be more out of touch — and there will be no blog on Friday. We’re all doing well — no need to worry. We’ll be back in touch on Saturday.