In anticipation of our visit to Caral, an archaeological site that represents the oldest city in the Americas, dating to about 2600 B.C., we visited a museum that uses pottery and other artifacts to tell the history of several leading cultures of Peru over more than 5,000 years.

The Larco Museum, which is privately owned, focuses on Peruvian history before the arrival of the conquistador Francisco Pizarro and the Spaniards in the 16th century. It was founded by Rafael Larco Hoyle who named it after his father. Larco Hoyle was an influential archaeologist during the 1940’s and 1950’s. The museum contains a vast number of pre-Columbian ceramics, a few textiles and some gold objects. All are housed in a beautiful old hacienda, built in 1760 over a huaca (a pre-Columbian ruin).

From our guide, Miguel Angel Medina, we learned that Peru counts 87 distinct cultural groups over the last 5,000 years, including the people of Caral. Of the 87, 85 are counted as kingdoms and two as empires: the Incas and the Wari.

Ancient cultures used ceramics to tell their stories and represent their lives. Although the Incas and the Wari were dominant in territory, the Moche, who reigned from about the time of Christ to 800, were the superior potters, Medina said. 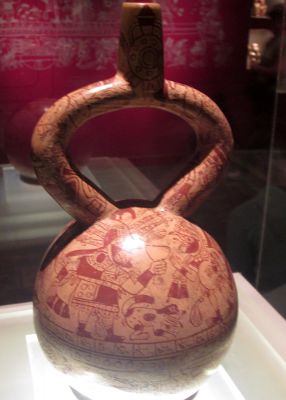 They lived along the coastal desert and benefited from having an ideal place in which to preserve their work. “The Moche left behind a paradise for archaeologists,” he said.