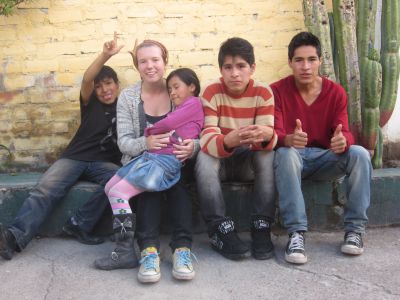 Our first service visit was to the city of Ayacucho, an historical city situated in a verdant valley 9,000 feet above sea level.  Ayacucho has plenty of historical significance — the last battle in the war of independence against Spain was fought here.  More than a century later, the Shining Path guerilla movement got its start at a local university and the conflict spread throughout the country, finally ending in the early 1990s.  Today the city of Ayacucho is home to 150,000 people.  Its colonial architecture is charming and the hills that surround the city are green with the summer rains.

Jeffrey is living and working at a Presbyterian Church and School established several years ago in a poor neighborhood perched above the city.  He teaches English classes to neighborhood children and is preparing for the beginning of the school year.

Mark is volunteering at CEDIF, an after school program started by a government ministry for disadvantaged children.  Mark assists one of the teachers and spends his days interacting with children.  They love when he throws them up in the air and catches them on the descent.

Will is lending his computer skills to the Leadership School, an organization founded to teach leadership principles based on sound values to adults as well as children in the surrounding community.  He has been asked to create a newsletter from scratch, learning new software and helping the School’s director communicate with a wider audience.

Nikki is serving at William Thomson School on the other side of Ayacucho.  This private, Christian school serves children in one of many humble neighborhoods in an area called San Juan Bautista.  She has helped the staff get ready for the beginning of the school year and is preparing to teach English when the students arrive.

Jordan lives and works at Vida (Life) Clinic and Preschool.  His hosts have kept him busy doing a variety of tasks in preparation for the new school year.  He also had a chance to build a concrete walkway, with help from Mark, for a teenage boy who suffers from paralysis in a rural area near Quinua.

Anne is volunteering at a social service center in the town of Huanta, about an hour away.  During her first weekend she had the opportunity to participate in a community-wide celebration of the anniversary of the center, including dancing and other festivities.  She also assisted with Vacation Bible School at a Presbyterian Church near her home.