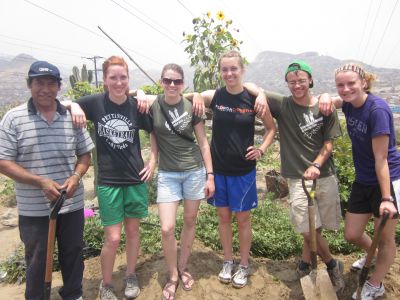 Villa Maria is an hour’s bus drive south of Miraflores, where we have our lectures, workshops and Spanish classes.  It’s often referred to as a pueblo joven, or young city, because it didn’t exist fifty years ago.  In fact, most of the populated areas in the “cones” that occupy Lima’s periphery were bare hillsides in 1950, when less than one million people lived here.  Today there are over 8 million inhabitants.

What is life like in a pueblo joven?  We organized a two-day visit to Villa Maria with our program assistant, Alicia, to find out.  Alicia settled here in 1979 — she, her husband and infant son “invaded” a vacant area with hundreds of other families in a desperate attempt to make a new life for themselves.  They first built a shack made of esteras (woven reed mats).  They soon replaced the mats with plywood.  Later, as they were able to save money, they replaced the plywood with cement blocks and a tin roof.  It took years until the local government granted them title to the property and, eventually, basic services like water, sewer and electric lines were installed.

We learned about all this by spending time in Alicia’s home and hearing her story.   Her sisters, Martha and Carmen, and daughters, Janeth and Sara, opened up their homes to us, providing meals and places to spend the night.  Her son-in-law, Glicerio, taught us how to prepare lomo saltado — he’s a chef at the Marriot Hotel in Miraflores.   Her husband, Oswaldo, hearing of our desire to see a younger version of a pueblo joven, organized a convoy of moto-taxis to take us to a four-year old settlement where their son, Richard, has worked to level a piece of the hillside and construct a home for his young family.  And Alicia’s grandchildren hosted us to games of soccer and volleyball after the temperature cooled off later in the afternoon.

The next day we met Senora Gregoria, an expert gardener, at a community gardening project to volunteer our services.  We learned how the vacant land under the power lines was transformed into growing space in a partnership between the municipal government, the electric company, a nonprofit organization and the families that live in this part of Villa Maria.  Then she explained our service project:  building two large “hot-beds”.  The idea was to install a plastic liner, laced with holes, a half meter below the surface to help retain water and fertilizer in this sandy soil.  We accepted the challenge, enjoying a few hours in the hot sun, getting some exercise and doing our small part to help the ten families that garden here grow healthy food for their children and generate a little income from selling the surplus.