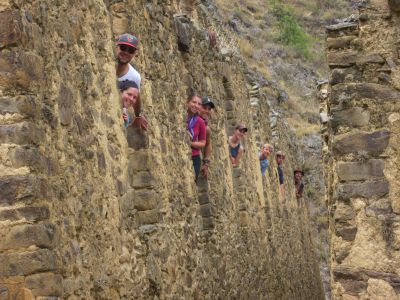 We had a chance to learn about the Inca culture by visiting three impressive archaeological sites as well as the home of a family living in a stone structure that predates the arrival of the Spanish five centuries ago.

Sacsayhuaman contains huge stones that archaeologists believe were cut and shaped with bronze chisels and hematite hammers in a nearby quarry.  The stones were apparently brought to the site by pulling them across large logs or log-shaped stones, harnessing the muscle of perhaps a hundred people.  The stones were fitted together in the form of a giant zigzag line, reminiscent of a lightning bolt.  In Inca culture, lightning was believed to connect the three worlds: heaven, earth and the underworld.

Moray is massive and unique for its circular shape.  The site is composed of a series of concentric, ring-shaped terraces that are larger near the top and smaller near the bottom of a bowl-shaped valley.  Terraces near the top were exposed to cooler temperatures and wind, while those near the bottom are considerably warmer and calmer.  Scholars believe that Inca engineers used this site as a sort of agricultural experiment station, testing how particular varieties of potatoes, corn, quinua and other crops grew under different conditions.

Ollantaytambo lies next to the Urubamba River in the Sacred Valley.  This fortress-like structure was the site of a battle between Manco Inca and Hernando Pizarro’s cavalry during the Inca rebellion against Spanish rule.  Manco Inca defeated Pizarro by flooding the plane at the base of the fortress, taking advantage of an ingenious system of aqueducts that continues to supply water to a series of fountains and pools almost five hundred years later — impressive indeed!

As the week came to a close, we prepared to visit one more Inca site:  Machu Picchu.  We’ll show you what we saw and did in our next post.