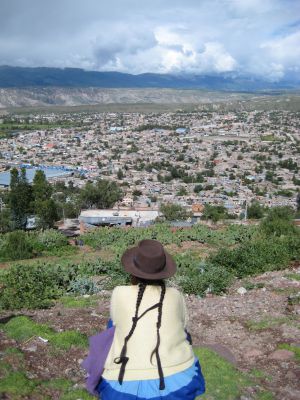 Tucked away in the Andes of south-central Peru, the city of Ayacucho has the distinction of being one of the country’s most historically significant places. The first signs of human settlements in Peru are nearby—archeologists date them to over 15,000 years ago. Fast forward several centuries to the 6th century A.D., when the Wari civilization that ruled much of Peru had its capital just outside of what is now Ayacucho. Twelve hundred years later, Peru’s struggle for independence from Spain was finalized with the Battle of Ayacucho in 1824. And it was here in the late 1970s that the revolutionary Sendero Luminoso (Shining Path) movement started, with the goal of destroying the existing society to build a new communist state. The battle that ensued between Shining Path and Peruvian government forces resulted in an estimated 69,000 deaths—mainly Quechua speaking peasants who suffered severe human-rights abuses. The Shining Path’s leader, Abimael Guzmán, was captured and imprisoned in 1992, and today Ayacucho is a safe, bustling regional center that five SSTers are calling home for six weeks.

Two are welcoming in the new academic year at local schools. Chelsea is teaching English at Institución Educativa Cristiana William Thompson, an elementary school with about 60 students. Her first two weeks were at the end of summer vacation here, so she helped paint the school, created lesson plans, and met the staff and new students. She stays busy with her host family, which includes five siblings, ages 1 to 18.

Marita is working at Institución Educativa Privada Inicial Vidas, a preschool and kindergarten where she is assisting the teachers and helping her 2- to 5-year-old students learn some English. In her first two weeks, Marita also helped paint the school, organize classrooms, and recruit students. Her host mom is the supervisor for Jessie, who is in the same building during the week, working at a small clinic where she sees several patients a day—most of whom are indigenous Quechua speakers (and some who pay their bill in vegetables). She’s also helping the clinic develop a safer system of prescribing medication. On the weekends, she’s in the village of Quinua, a 50-minute drive on winding mountain roads. There she’s helping re-open a larger clinic that was closed for several months due to lack of funds.

Lauren is at Kawsay Asociación Cristiana, an organization that produces materials in the Quechua language for Bible study and religious radio segments. She has been researching and collecting faith-based Spanish-language resources on family issues (domestic violence, alcoholism, child development) to be translated into Quechua and produced and distributed to a network of radio stations. In an unexpected service opportunity, Lauren recently helped prepare a variety of Peruvian dishes for a group of visiting U.S. engineers who were working on a new building for a local orphanage. The week’s menu included, among other things, ají de gallina, lomo saltado, causa, and sopa criolla.

Becca is working at Iglesia Asamblea de Dios de Los Olivos, a church of about 70 people, mostly indigenous, where she is teaching Sunday school and leading children’s programs four days a week. In addition, she’s been accompanying the church’s pastor and his wife—who are also her host parents—on home visits, prayer meetings, and other church activities. The church services are mainly in Quechua and, when asked, Becca has led the congregation in prayer—although in Spanish rather than Quechua!