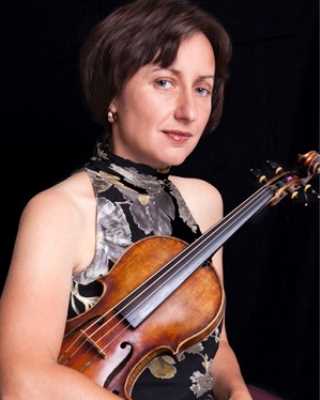 Violinist Solomia Soroka, born in L’viv, Ukraine, made her solo debut at age 10, playing the Mendelssohn Violin Concerto with the L’viv Philharmonic Orchestra. Her playing combines the powerful background of the Ukrainian system with a passionate exploration of lesser played music, especially American and Ukrainian.

She has appeared as soloist and as chamber musician at concerts and festivals in Australia, New Zealand, Germany, France, Italy, Czech Republic, Ukraine, USA, Canada, China, Korea, and Taiwan. She is praised for being “a truly wonderful musician” (The Press, Christchurch, New Zealand), her “technical mastery…ferocity, light and mystic lyricism” (Daily Freeman, New York), and as one who “plays with great warmth and authority” (BBC Music Magazine). She has performed with orchestras in Ukraine, Australia, and the United States.

Ms. Soroka has performed premieres of a number of important contemporary Ukrainian compositions for violin, including works by Borys Lyatoshynsky, Myroslav Skoryk and Yevhen Stankovych.

Since her U.S. debut in 1997, she has performed throughout the United States. Her recitals in Washington DC were part of the Smithsonian Institute performing arts series and she received the following review in the Washington Post:

“Soroka is a superbly equipped violinist, at ease with the technical challenges of Sarasate or of Jeno Hubay’s Czardas No. 2, but even more impressive in the gentler moments…. Her tone is warm and mellow on the low strings, brilliant on the high strings, perfectly controlled and expressively used.”

Solomia Soroka has toured and recorded extensively with her husband, the pianist Arthur Greene. Their Naxos recording of Four Violin Sonatas by William Bolcom was selected as Recording of the Month with the highest ranking for both artistry and sound quality by Classics Today, and received reviews in various distinguished journals: “Another virtuoso piece…confidently delivered by this brilliant duo” (Gramophone)

In the past eight years Soroka has been recording for Toccata Records, based in London, where she made six premier recordings, of music by American composer Arthur Hartmann, Ukrainian Myroslav Skoryk, Mykola Lysenko, and Yevhen Stankovych, and Holocaust composers Leone Sinigaglia and Bernhard Sekles.

Ms. Soroka’s current passion is for unknown American music from the late 19th century to the beginning of the 20th. She has gathered a substantial collection of rare scores of American sonatas from that period by lesser-known American composers, and is in a process of recording and releasing them online. She will tour US universities with lecture-recitals introducing this unknown music to American students, academia and a general audience.

Solomia Soroka is currently a violin professor at Goshen College, Indiana, and is an artistic director of the Sherer Violin/Piano Competition for young musicians. Ms. Soroka has served on the faculty of chamber music at the Kiev Conservatory, and has taught at the Music Fest Perugia in Italy, the Castleman Quartet Program, Pilsen Summer Academy, and Schlern Music Festival. She is active giving masterclasses in her native Ukraine, USA, China, South Korea, Taiwan, Israel, Czech Republic, and Italy.

-ONCE, a 50th Anniversary Celebration of Ann Arbor’s ONCE festival

-Tainan National University of the Arts

The idea of this course is not only to teach students about chromatic harmony in Western music, but to better understand the complexity and the beauty of this music, to explore the process of creation of this music, and to analyze composers’ way of thinking about harmony and form during different stylistic periods. The students will listen to a lot of music and will compose some themselves. Since I was lucky to have studied theory in both United States and Ukraine, in this course I combined the best traditions of teaching the subject of both countries, by adding a number of definitions and exercises from one of the most famous theory books in former Soviet Union.

This course will strive to accustom students with classical music and to lay a foundation for study of upper level music history. The course focuses on the six main periods in the history of music, and introduces the most important composers and their works. Students will study different musical styles and compare them to styles of visual arts, architecture and literature. We will listen to a lot of music and learn to distinguish different stylistic characteristics.

• “Soroka is a superbly equipped violinist, at ease with tech- nical challenges […],but even more expressive in the gentler moments […].Her tone is warm and mellow on the low strings, brilliant on the high strings, perfectly controlled and expres- sively used.”

• “A superb duo exploiting Bolcom’s fondness for the fiddle.” “Another virtuoso piece…is confidently delivered by this bril- liant duo.”

• “Soroka manages this difficult music admirably. Her pitch is right on target, and she maintains a smooth sound through Roslavets’s linear obstacle course”.

• “Soroka, in particular, deploys all the expressive devices with which the period’s own violinists might have illuminated the stage for such a program…”

• “Toccata have revealed Skoryk in the best possible light us- ing two fantastic performers – a husband and wife team. Do be sure to check out any discs they’ve produced together.”

• “The husband and wife team of violinist Solomia Soroka and pianist Arthur Greene simply eat up this music like starving artists getting their first substantial grub in ages.”

• “Lysenko wrote the Fantasy on Two Ukranian Themes for either violin or flute with piano. Solomia and her husband, pianist Arthur Greene, endow its opening theme with fresh, ruddy charm and play exuberantly throughout. The Ro- mance, arranged by the composer, heats up quickly, with the violin breaking into impassioned octaves throughout its duration; in Soroka’s fevered performance they prove highly effective.[…]”

• “There are times in life when you know you in the presence of genius. That was the feeling at the Church of the Naza- rene during recent Venice Symphony concert. The violinist, Solomia Soroka, played “Concerto #5 in A minor” by Henri Vieuxtemps with the orchestra. The audience seemed hyp- notized by the musician who performed the difficult piece of music with intensity and beauty. I was so in awe, I had to remind myself to breathe.”

Rhapsody. Pre-concert lecture about the use of Hutsulian major and minor modes in above works.

Included an American premier of the Turkewich Violin Sonata

International Conference dedicated to the 60th anniversary of Lviv Krushelnytska State Music Lyceum, 2010
• Presentation of article on the Music Educational System in the US

Run annual youth competition for students grades 8-12. The competition takes place at The Music Center of Goshen College. The winners perform with Livonia Symphony and the Maple City Orchestra

Founder of the multi-cultural music series of recitals and lecture-recitals to represent the diverse community of the Metropolitan Area of Detroit. The series is held at the Ukrainian Archives and Museum in Hamtramck, MI

Initiator of international participation in the Music Olympiad, and head of American team