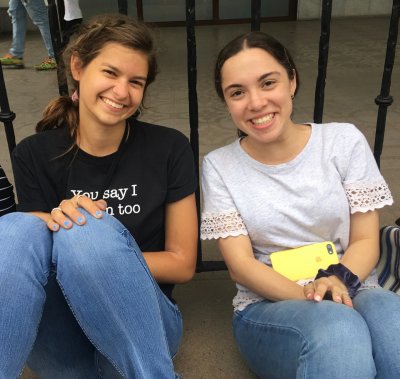 This afternoon was our contrast tour, which took us first to the General Cemetery of the City of Guatemala, then to the adjacent precipice over the city landfill, and then on to Cayala Mall. The tour introduced us to extreme wealth and extreme poverty in Guatemala City, all within the space of a few miles and a couple of hours.

Before heading out for the tour, we viewed parts of the film “Recycled Life,” which was shot in 2007 at the city landfill, where at that time some 2,000 people, including children, lived and scavenged/recycled goods to make a living. When a methane-fueled fire broke out in 2007, the city began disallowing people to live in the landfill, and forbade children from being in the dump. The video gave those who work in the landfill dignity and a voice. Seeing those people from a precipice at the back of the cemetery packed a punch since we knew part of their story.

From there we went to Cayala Mall, which is less a mall and more of a city within the city. The city/mall has a school, a Catholic Church, apartments and other amenities, and is for the wealthiest 1 percent of Guatemalans and ex-pats with money. Perhaps ironically, Ciudad Cayala was built to look something like a modern colonial city, with perfectly clean streets, a Ferrari shop, a Nike shop (one pair of shoes was $450 U.S.) and many other high-end boutiques. Students calculated that person earning the average wage of a rural Guatemalan would have to work somewhere between 24 and 57 days to purchase a basic outfit of clothing from the mall’s shops.

In the city cemetery, Mario Chavez gave us a tour of several tombs and distinct ethnic areas within the 12-football-field-sized space. The Jewish portion of the cemetery had a wall honoring those relatives who were killed during the Nazi Holocaust in Germany, and there was also a place for British graves and German graves. Middle-class Guatemalans can pay $20 a year to keep their deceased relatives in a multi-layered mausoleum niche, but the wealthy have magnificent tombs. The Castillo family tomb is built a bit like an Egyptian pyramid (that’s Jacob, who has Egyptian heritage, in front of the tomb in the photo below). The Castillos are one of the most affluent families in Guatemala, among the 10 percent who own the majority of arable land and most businesses in the country.

Our contrast tour followed a morning where we talked about justice with Andrea and Mario during our “Youth and the Fullness of Humanity” sessions. We talked about MLK and just and unjust laws; gender injustices in Guatemala and the U.S.; and micro and macro levels of actions that work toward justice. We examined Matthew 5:20 and asked how are way of living is contributing to injustice or justice. We also viewed an extremely helpful interview with Harvard Professor Donna Hicks about dignity. “Dignity is a universal human yearning,” said Hicks. “Dignity is the thing that can unite us, our deep desire to be treated as a person of value.” Hicks also said science has shown that injury to our dignity shows up in the same place in the brain as does physical injury. “Dignity is part of what it means to be a human being, and everyone deserves to be treated with dignity. Respect is something we earn.” We then looked at places in the biblical text where Jesus treated people with dignity, such as the passage about the perpetually bleeding woman in Luke 8:43-48.

This evening after dinner we had a worship service again, this time led by Belle, Gonzi, Seth and Johanna. The group led us in singing and then opened up several questions for reflection about our day discussing justice and experiencing the contrast tour. One of the highlights was singing together an original song (“Adora”) written by and led by Seth. Very cool. After worship, we also discussed our practices of using phones during times we are together, and collectively decided that we want to mark off meal times as phone-free times, with phones left in our rooms or placed in the middle of tables. So, parents and friends back home, if your daughter or son doesn’t respond immediately to a text or answer a phone call, it may well be that we are eating together, or that we are off campus where we don’t have wifi. The purpose of phone-free periods is to continue building the strong community we’ve been building on this trip, and to honor the people who are immediately in front of us. Thanks for helping your sons and daughters and friends respect those meal-time spaces.

And thanks for your continued support, expressions of love, and your prayers for our positive experience and safety. We are doing amazingly well together, learning and growing and asking questions and engaging our Guatemalan hosts. Thanks for joining us on the journey.