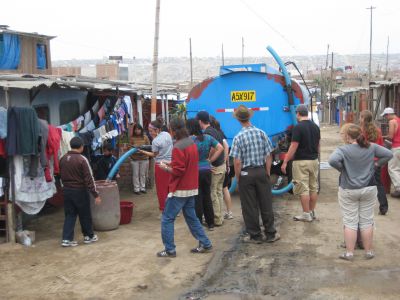 Just 50 years ago, Lima’s population was close to 1 million. Today the greater metro area is approximately 8.5 million, or nearly one in three Peruvians.

The stories behind that spectacular growth are sometimes tragic: earthquakes and floods that decimated communities drove people into Lima, as did the terrorism perpetrated by the Shining Path and other radical groups in smaller cities and villages in the 1980s and ‘90s. But many migration stories are hopeful: People move from the countryside to Lima in pursuit of education, employment, and a better life.

Unfortunately, that pursuit is typically difficult and dangerous. One of the main challenges is a lack of affordable housing. In the 1970s, the shantytowns where many migrants made their homes began to be called pueblos jóvenes (young towns). While immigration has slowed in the last decade, the population is still increasing, and many migrants now raise their families in the same pueblo jóven where they originally settled.

Our SST group recently became acquainted with two of these settlements in the southern part of Lima: Villa El Salvador and Villa Maria del Triunfo. In Villa Salvador, we visited Chavin de Huantar, a very young pueblo jóven, where we met Corpusa, a mother of three who moved from her village in Peru’s highlands when she was a teenager. She welcomed us into her home and told us about her neighborhood.

Ten years ago, Corpusa was one of 2,000 people who “invaded” an empty, privately owned lot—not an uncommon strategy for those in need of housing–that was slated to become a grocery store. Little by little, after many struggles with police, the community began to take shape. The settlement still lacks water and electrical service (although illegal wires provide energy to many of the homes) and stray dogs roam the dirt roads.

Riofrío’s report provides big-picture statistics on southern Lima that echo Corpusa’s story: “Approximately 33,250 plots built up between 1992 and 2001, in very steep areas, with great problems for construction. About 60 percent of these already have property titles. However, the percentage of plots with potable water is less than 5 percent.”

Corpusa and her neighbors—who are fortunate to be on relatively flat ground–wait for trucks to deliver water to the large barrels outside each home. At a cost of 1.5-2 soles per barrel (between 50-75 cents) the water they buy is typically more expensive than what’s available to Limeños with regular water service. For $54 we were able to hire two water trucks to come with us, and the SSTers spent the morning refilling many empty barrels (and getting pretty wet in the process).