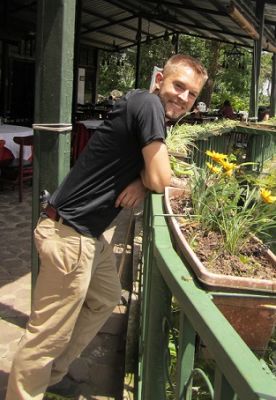 Jacob is in the department of Boaco, a sparsely-populated central region known for its hilly terrain, cattle, and agriculture. The municipality where he lives, Laguna de San Onofre, is remote and difficult to reach without an all-terrain vehicle. In fact, when Jacob arrived in Boaco, he rode the last few kilometers to his host family’s house on horseback.

Unfortunately, when we visited him, a late bus arrival resulted in a missed connection for the last leg of the journey into San Onofre. The trip was delayed to the point where we had only a few minutes to visit with Jacob before our ride back to Managua departed. This was enough time for Jacob to say that it he is having a great experience in the campo, herding cattle and helping his host family with their farm work. His host mother is the health promoter for the area, and early in his time there, Jacob awoke in the middle of the night to the sound of a baby being born in an adjacent room in the family’s house. The laboring woman had been carried there in a hammock during the night, and the baby came before they could get her any closer to a clinic. 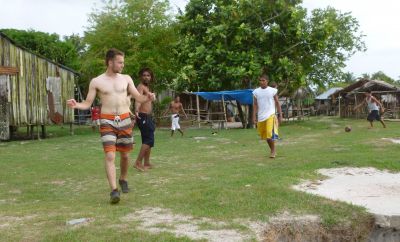 Jacob also reported that he is helping one of the neighbors learn English, and he has been invited to play soccer with the local boys. During his first game he scored a goal, which prompted the boys to invite him to play again. He also said that the people of the village now call him by name instead of simply el chele (the common Nicaraguan term for a fair-skinned person), which tells us that he is fitting into the community and adjusting well to life in San Onofre.

[Note: We did not have time to take photos during this unexpectedly brief visit. Please accept our apologies. We are posting a few pictures from last year’s visit to San Onofre as well as several photos of Jacob during the first 6 weeks in Carazo.]