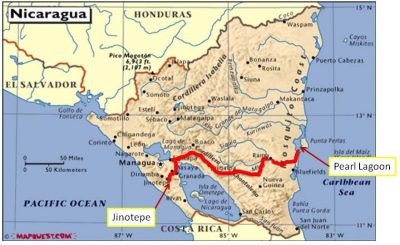 Getting from Jinotepe across the country to the Caribbean coast (also called the Atlantic coast or East coast) is an all-day endeavor.  Leaving at 7 a.m. we headed east over flat, parched, brown terrain.  The rainy season hasn’t started here yet.  Approaching the center of the country we saw hills and then small mountains, climbing in elevation.  This region produces a lot of cattle and dairy products.  Passing the midpoint of the country and descending back into coastal flatlands, the brown grass gave way to greener landscapes.  On this half of the country the rainy season is longer and the dry season shorter.

The paved road only goes three-fourths of the way across the country, to the town of Rama, where we parked the bus and finished the journey on the Rio Escondido (Hidden River).  With five boxes of fruits and vegetables, 26 suitcases, 26 people, and 55 gallons of drinking water all loaded onto two speedy boats, the rest of the trip took 2.5 hours.

When the boats pulled into Pearl Lagoon and parked at a town of the same name, population 2,500, it was 6 p.m. and we had been traveling 11 hours.  The students commented that it was odd, after having become accustomed to Jinotepe, to feel culture shock again.  On the Caribbean coast the predominant languages, ethnicities, religions, architecture, and many other aspects are different.  Visitors here often remark if feels like they entered a different country.  We are fortunate that GC’s coordinator in Nicaragua, Dalena Taylor, is from this community and organized our trip.

The history of how this half of the country came to be different from the other half was explained by our speaker, Johnny Hodgson, who recounted 500 years of history in four hours.  Although our previous readings had summarized how this side of the country had been colonized by Protestant England (rather than Catholic Spain, as on the other half of the country), the speaker related a series of stories that brought the history to life and made it personal.  A recurring theme was that for 500 years it has been outsiders (British, Spanish, pirates, U.S. Marines, and politicians from the eastern half of Nicaragua) who have made the important decisions that repeatedly marginalized the coast’s inhabitants, who include various indigenous groups, descendants of former slaves, and some mestizos.  In the past 25 years a regional autonomy process, in which our speaker has been a key player, has slowly been making its way into new laws and programs. 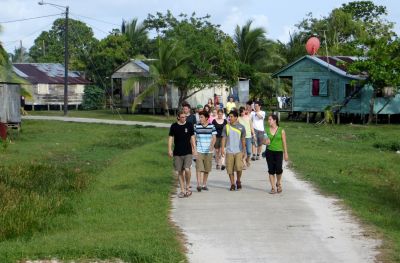 In the afternoon Dalena led us on a walk through the countryside to the neighboring town of Awas, a small village of a few hundred Miskito residents.  The Miskitos are descendents of an indigenous tribe that mixed with escaped African slaves, and their name comes from the “muskets” of the 1600’s, which they had bought from the British.  Dalena introduced us to two residents who shared what it meant for them to be Miskitos, the problems they have faced as an ethnic minority, and how the introduction of literacy has made them aware of their ethnic heritage and confident they can now preserve it.  The students later commented that the pride and knowledge of their ethnic heritage sounded like words from the mouths of elders, but these were two teenage boys.  Like most Miskitos in the area, they speak the three languages heard here: their native Miskito, Creole, and Spanish.

As we strolled through a grassy park by the beach, a group of kids eyed us, obviously talking about the odd group that had shown up in their town.  We wondered what it was like to grow up Miskito here in Awas.  As we were leaving, both groups still curious about the other, a lone boy cautiously approached and motioned to converse with us in the universal language common to virtually all countries, cultures, and ethnic groups … he held out a soccer ball.

Little could he know that, where we come from in the land of Goshen, the answer is known before it is asked.  The Goshen-ites either kicked off their shoes or formed a cheering section, Miskito kids ran onto the field howling with delight, and referee Maria made the team captains shake hands.  Of course, the game would be a mismatch; not only was our team older, but it included three members of the college’s soccer team.  The pacifists agreed to take it easy on the little kids.

It was less than a minute before the children of Awas scored against Goshen College.  We were as dumbstruck as they were ecstatic.  Could this overshadow the 1980 U.S.-U.S.S.R. hockey upset?  Would Team Awas pull off the quintessential Cinderella story?

The GC cheering section swung into action with the familiar autumnal cheers, Team GC picked up their game, but the next interminable minutes remained scoreless until we finally prevailed.  The score was 1-1.

The mighty Maple Leafs expected to put the embarrassment of the first Awas goal behind them by racking up several more goals to make the score as lopsided as the age differences.  Captain Caleb took off his shirt in desperation, but 10 minutes later, the teams remained deadlocked at 1-1.  As the sun neared the horizon, and the Leafs knew they had to walk back to Pearl Lagoon before dark, referee Maria announced that the next goal would determine the winners. 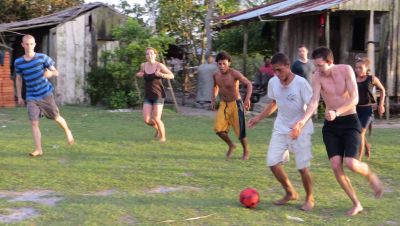 The tempo of the game reached a frenzy that continued for a scoreless semi-eternity.  However, time came to an end as the losing team watched in abject horror as the ball rolled through the two old sneakers that marked the goal.  The college where “football” means “soccer,” whose creative cheering fans are envied by the rest of the league, which had a team reach the national competition in 2005 ……. had lost.  The kids of Awas had mopped up the field with us; David had defeated Goliath.  But mostly everyone had a great deal of fun, and we shall return.  Wait until the next SST group comes in 2014.

That evening at supper Josh was surprised by a birthday cake, and Dalena sang for him a traditional Creole birthday song.  At the end of the day Josh said that today — with the different events, the location, especially the soccer game, and everything else — had been the very best birthday of his life.

In the evening the men in the group continued what has become a strange testosterone-filled ritual: large numbers of shirtless pushups.  For the rest of us, it would be OK if this were to pass.

Today we took a vacation to the Pearl Cays, a tiny group of coral islands in the Caribbean, about an hour away.  Because it is an understatement to say the cay we beached on (about the area of a soccer field) was picture perfect, you can look at the pictures below.  Once purchased by private individuals, these islands are again communal property of the Miskito communities on the coast. 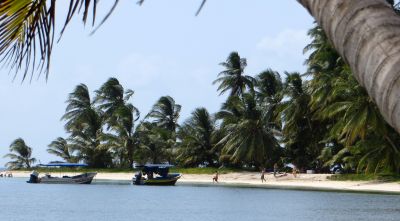 Back in the town of Pearl Lagoon we took some time before supper to process what were the major themes we learned from Johnny Hodgson, the Miskito teenagers, other locals, and our readings.  In the evening many students enjoyed catching luminescent (and non-stinging) jellyfish off a local pier.  The following day we had the long journey back, over the Rio Escondido and the 6-hour bus ride, until we arrived back at the place that now feels like ‘home.’