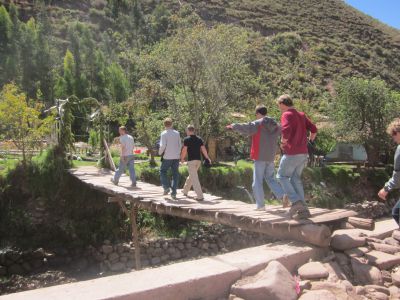 We began our first full week in Peru with lectures, workshops and language classes.  Pastor Celestino welcomed us to the church where our classes are held and spoke about the history of the Mennonite Church in Peru.  He recounted the experiences of missionaries in the 1980s as they overcame language barriers, initial distrust, persecution and other challenges and their development of health and education programs to serve the needs of local communities.

Juan Carlos Machicado, author and anthropologist, gave an intriguing presentation about Andean spirituality.  His research casts doubt on the common perception that the Inca people worshiped the sun, moon, snow-capped peaks and other deities.  The Andean people have a name for the creator God, Wiracocha.  Juan Carlos showed us a photo of a little-known ceremonial pin featuring humans and animals bowing down to Wiracocha.  Based on this and other evidence he believes the Incas and the cultures preceding them were monotheistic.   If Juan Carlos’ hypothesis is correct — if the people living here before the Spanish conquest worshiped a single deity — then we have more in common with the ancient Andeans than we thought.

Luz Atapaucar learned Peru’s other official language, Quechua, from her grandmother.  As a university student she studied Quechua grammar and learned that the language of the Inca is still spoken by millions of Andean people in Peru, Bolivia, Chile, Argentina, Ecuador and Colombia.  Luz explained how the language can be used to evoke emotion and express feelings more deeply than is possible in Spanish or other modern languages.  Quechua is aggregative (suffixes are added to words to modify their meanings) and onomatopoeic (words sound like the object or action they are describing).  Most Quechua speakers are older; younger people learn Spanish in school and speak Spanish with their peers.  Like many aspects of traditional Andean culture, the language that has been spoken for centuries may disappear in one or two generations unless some value is placed on its preservation and younger people make an effort to learn it.  Most of our students are living in homes where several family members still speak Quechua and it was rewarding to learn some phrases they can use to communicate with them.

Mining, according to many economists, is the key driver of the Peruvian economy.  Rebeca Valverde Delgado described how mineral extraction is basic to any society since it provides raw materials necessary to produce tools, electronics and other goods.  Peru is rich in minerals, including gold, silver, copper and other metals.  Rebeca explained how legal mining operations take care to protect the environment and promote social welfare, from initial exploration to eventual closure of the mine.  Unfortunately, much of Peru’s mining activity is done illegally and without regard for people or the planet, leading to contamination of the soil, water and air, health problems for downstream residents and destruction of the social fabric that binds together traditional communities.  Rebeca’s hope is that illegal mines can be detected and shut down and replaced with mines that operate according to international health and safety standards.

Two accomplished musicians — Mauro Claros Chatas and Americo (Amaru) Mejia Suñiga — led a workshop on Andean music.  Mauro grew up playing the zampona while watching his family’s sheep and cows during summer vacation in his native Puno, near Lake Titicaca and the Bolivian border.  Amaru learned to play the same instrument as a child in nearby Cusco and later studied music at the university level.  Mauro and Amaru introduced us to traditional Andean music through word and demonstration, using a variety of instruments including the zampona (sometimes called a pan flute), quena (similar to a recorder), cuatro (four-stringed miniature guitar) and drum.  At some point we started singing along to easily-recognizable songs and soon thereafter got on our feet to dance.

There was a lot more to the week than lectures and workshops.  We met together for Colloquium, a chance to review and synthesize what we have been learning, and for Goshen Tambo, an opportunity for worship and reflection on our experiences in another culture.  We shared meals of Peruvian food prepared by Ines Cordova Garcia, a host mother who lives across the street and delivers our food each day in a wheelbarrow.  And we had a chance to sample some local trout raised in ponds owned by another host family in nearby Lucre — delicious!