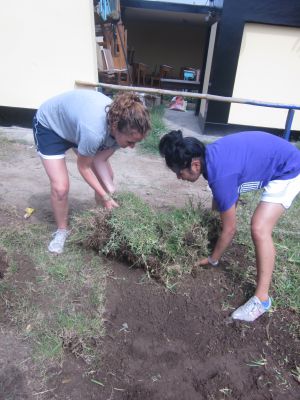 There is so much to learn about Peru.  Nestor Vergara taught us about the social and economic realities of life in the marginal areas that surround Lima.  He moved here from the rain forest city of Iquitos to pursue a college degree and explained how he and his wife built their home — from straw mats to plywood to concrete block — over several decades.  The statistics Mr. Vergara offered to quantify problems such as domestic violence, child abuse and other social ills were sobering.  But he sounded a hopeful tone at the end of his presentation, reminding us of the resilient spirit of the people who migrate to Lima and their willingness to work hard for a better life.

Jerry Acosta is an economist and former banker who described his family’s struggles during the time of terrorism in his native city of Tingo Maria.  Mr. Acosta explained how the members of the Shining Path gradually infiltrated the schools, the army, even the church.  He described the evolution of the terrorists’ tactics and the government’s response to the crisis.  Mr. Acosta himself narrowly escaped an assassination attempt by a teenage boy equipped with a hand grenade.  Like hundreds of thousands of people living in the provinces, he finally moved his family to Lima in search of safety and the chance for a new life.

Camilo Ballumbrosio is an afro-peruvian musician who was raised in the coastal city of Chincha.  He described how slave traders brought the first Africans to Peru to work in the mines and, later, the plantations carved out of the fertile coastal valleys.  His ancestors picked cotton and cut sugar cane.  African music was forbidden by their masters, so the slaves developed drums that were easily disguised.  One was the calabaza (pumpkin) and another was the cajon, a wooden box shaped like a packing crate.  Today the cajon has emerged as a percussion instrument with a distinct sound and a growing following.

We spent a morning visiting Pachacamac, an archaeological site south of Lima.  Four cultures inhabited this area — the Lima, Wari, Ychsma and Inca.  Each culture built structures here, most of them sacred or ceremonial.  After our visit we drove a short distance to an orphanage where we spent the night.  Casa Hogar Juan Pablo II is a children’s home begun by a catholic priest named Father Joe.  Each child lives in a family group with seven other kids and a married couple.  We spent several hours working with them to clean up the playground areas at the public schools they attend.  And then we played, played and played some more — teeter totter, soccer, volley ball, games.  What fun!